US fines Boeing $2.5bn after fraud charges tied to crashes 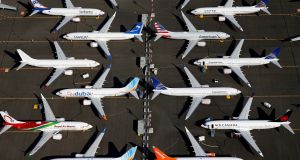 Boeing has been fined $2.5 billion (€2bn) by the US justice department after being charged with fraud and conspiracy in connection with two fatal crashes of its 737 Max airliner.

Burns said the company had also engaged “in an effort to cover up their deception”.

The Max was grounded worldwide in March 2019 after crashes in Indonesia and Ethiopia that killed 346 people. A March 2020 congressional investigation concluded that Boeing promoted a “culture of concealment” and was “grossly inefficient” in its oversight of the Max’s development.

At a heated congressional hearing in October 2019, senator Richard Blumenthal accused Boeing of selling “flying coffins” as a result of its decision to conceal issues with the planes from pilots.

“The tragic crashes of Lion Air flight 610 and Ethiopian Airlines flight 302 exposed fraudulent and deceptive conduct by employees of one of the world’s leading commercial airplane manufacturers,” said Burns.

Boeing admitted that two of its technical pilots deceived regulators about the safety of the Max’s MCAS stall prevention software, implicated in both of the fatal crashes. In both cases, the planes crashed shortly after take-off when their pilots were unable to regain control of the planes after they went into a nosedive.

The settlement includes $2.2 billion in compensation to the families of the people killed in the two Max crashes and a $243 million fine.

In a statement, Boeing once more blamed its former employees.

The “agreement is based on the conduct of two former Boeing employees and their intentional failure to inform the FAA Aircraft Evaluation Group (AEG), the group within the FAA responsible for making pilot training determinations, about changes to the maneuvering characteristics augmentation system (MCAS)”, the company said.

David Calhoun, Boeing’s president and chief executive officer, said: “I firmly believe that entering into this resolution is the right thing for us to do – a step that appropriately acknowledges how we fell short of our values and expectations.

“This resolution is a serious reminder to all of us of how critical our obligation of transparency to regulators is, and the consequences that our company can face if any one of us falls short of those expectations.”

Boeing has now addressed concerns about the Max and the plane returned to service in the US in December.

Lawyers for the families lost in the Ethiopian Airlines crash dismissed the settlement and said they would continue their litigation against Boeing.

“The allegations in the deferred prosecution agreement are just the tip of the iceberg of Boeing’s wrongdoing - a corporation that pays billions of dollars to avoid criminal liability while stonewalling and fighting the families in court.

“This agreement, including the ‘crash-victim beneficiaries fund’, has no bearing on the pending civil litigation against Boeing, which we plan to prosecute fully to ensure the families receive the justice they deserve,” Clifford Law Offices said in a statement.

They said the 737 Max should not have been returned to service “until all of the airplane’s deficiencies are addressed and it has undergone transparent and independent safety reviews – which to date still has not occurred”. – Guardian News and Media 2021