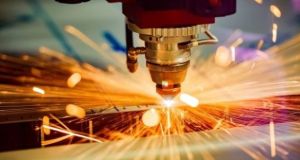 The Irish manufacturing sector ended 2020 on a positive note as businesses prepared for the end of the Brexit transition period.

In December, the AIB Ireland Manufacturing PMI rose to 57.2 from 52.2 in November, as companies sought to expand inventories to guard against a potential hard Brexit.

The topline PMI figure is derived from indicators for new orders, output, employment, suppliers’ delivery times and stocks of purchases. Any figure greater than 50.0 indicates an overall improvement of the sector.

The five-point rise in the headline figure was the third-largest such rise on record, behind just June and July last, when there were also big gains as the sector reopened following the first set of coronavirus lockdown restrictions.

All five components of the headline figure recorded growth. The greatest uplifts came from the new orders and output subindices, which boosted the PMI by 2 and 1.7 points respectively, followed by suppliers’ delivery times (+0.6), employment (+0.4) and stocks of purchases (+0.3).

New orders in particular rose at their fastest rate since July, as did production. The latest indicators show manufacturers ramped up purchasing operations at the end of 2020 both to support current workloads, and to build stocks for 2021 as the Brexit transition period ended.

The volume of inputs ordered rose the most since March 2019. This increase in demand placed pressure on supply chains, however, with December data indicating the greatest lengthening in suppliers’ delivery times since May.

Higher work volumes saw companies increase their workforce for the third consecutive month in December, with employment expanding at its strongest rate since April 2019.

“Supply chains remain under pressure, with manufacturers reporting shortages in raw materials as well as delays in deliveries owing to congestion at ports and on roads. Price pressures continue to build, with a further sharp increase in input prices in particular,” said Oliver Mangan, chief economist at AIB.

“Firms remain optimistic about the 12-month outlook for production, no doubt hopeful that the recent positive news on Covid vaccines will help bring about an improvement in economic conditions over the course of 2021,” he added.