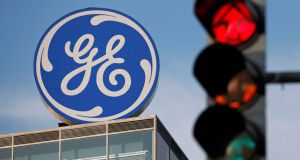 The pay package of General Electric chief executive Larry Culp was rewritten to reduce the risk that he would miss out on a windfall. Photograph: David Cerny/Reuters

Unions have blasted a $47 million (€38.3 million) bonus secured by General Electric chief executive Larry Culp this month, after his pay package was rewritten earlier this year to reduce the risk that he would miss out on a windfall.

As Covid-19 vaccine hopes fuelled a stock market rally in November, GE’s shares went above $10 for the first time since March. Now, after 30 days of trading above $10, Mr Culp has locked in a bonus that will pay out at least $46.5 million in 2024 at the earliest.

The bonus has unions seething and could ignite a broader backlash from GE investors. In August, the company rewrote Mr Culp’s 2018 pay plan so he could earn a bonus when shares traded above $10 rather than the original target of $19.

The new plan also preserves Mr Culp’s chances of scoring a maximum $230 million bonus. He now only needs to drive GE’s shares above $16.68 to reap the full amount rather than $31 as his 2018 plan intended.

The pay comes as GE’s aviation unit has cut 20 per cent of its workforce this year to improve margins. – Copyright The Financial Times Limited 2020

3 Cartoon Saloon boosted by deals with Apple and Netflix

4 Is owning a home a pipe-dream for the young?

7 The trillion dollar question: what does a trillion look like?

10 Roll up, roll up: capitalism will drive cannabis legalisation in Ireland