Shares had surged 6% on Friday as index-trackers bought in 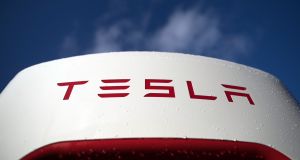 Shares of electric carmaker Tesla slumped in their debut on the S&P 500 on Monday. Photograph: Chris Ratcliffe/Bloomberg

Shares of electric carmaker Tesla slumped in their debut on the S&P 500 on Monday, pulling back from record-high levels as worries over a fast-spreading new coronavirus strain in Britain weighed on markets.

The company, headed by billionaire Elon Musk, becomes the most valuable ever admitted to Wall Street’s main benchmark, and accounted for a 1.69 per cent weight in the index ahead of Monday’s trading. The shares had surged some 70 per cent since mid-November, when Tesla’s debut in the S&P 500 was announced.

The shares had jumped 6 per cent on Friday in a day of frantic trading ahead of their S&P 500 entry.

Tesla’s addition to the S&P 500 led index-tracking funds to buy $90.3 billion of shares by the end of Friday’s session so that their portfolios reflected the index, according to S&P Dow Jones Indices’ analyst Howard Silverblatt. The change is effective prior to the open of trading on Monday, S&P said earlier in December, and Tesla is replacing Apartment Investment and Management.

“All the buying was done on Friday,” said Keith Temperton, a sales trader at Forte Securities. “The news is done now... the question now is what next.”

The dividend yield for the S&P after Tesla’s inclusion would fall to 1.53 per cent from 1.56 per cent, he said.

California-based Tesla’s stock surge has put its market value at about $630 billion, making it the sixth most valuable publicly-listed US company with many investors viewing it as wildly overvalued.

Tesla is by far the most traded stock by value on Wall Street, with $18 billion worth of its shares exchanged on average in each session over the past 12 months, easily beating Apple, in second place with average daily trades of $14 billion, according to Refinitiv.

About a fifth of Tesla’s shares are closely held by Mr Musk, the chief executive, and other insiders. – Reuters

6 Sorry, Domhnall Gleeson, I don’t want to chat to you anymore

10 Why Irish households are not, after all, among the best off in the EU