Carmaker has plans for price increases ‘in the drawer’ 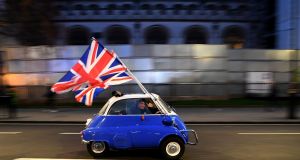 A man driving a BMW Isetta drives past Brexit supporters gathering in Parliament Square, in central London on January 31, 2020, the day that the UK formally leaves the European Union. Photograph: AFP via Getty

A no-deal Brexit would cost German carmaker BMW “hundreds of millions” of euros, with increased tariffs passed on to consumers, the group’s chief financial officer warned on Wednesday.

Nicolas Peter said the premium manufacturer, which produces Mini models in Oxford in England, had “plans [for price increases] in the drawer” that would take effect if no agreement was reached by the end of the year. But he said the Munich-based company was confident it would not have to shut its Oxford plant in the immediate aftermath of a no-deal Brexit, because BMW had stockpiled components.

“Technically we are prepared,” Mr Peter said. “We have the ability to transport cars and parts even in a no-deal scenario.”

BMW’s UK factory produces more than 220,000 Minis per year, and is a big employer in the area.

The executive said increased customs checks would not be the biggest challenge to BMW’s British business, and the company would “be on top of the logistics very quickly”.

“But there will be a 10 per cent tariff on cars,” he warned, “and that would have a negative effect [on BMW] in the mid-three-digit-million euro range per year”.

This “substantial” hit to profits would not be wholly swallowed by the group, which would “pass on higher costs”, Mr Peter added. “Minis in Europe and BMWs in UK will be more expensive,” he confirmed, but did not provide further details on the level of any increase.

German car manufacturers’ exposure to Britain has fallen sharply in recent years, with just 590,000 cars exported to the country in 2019, down from 810,000 in 2015, according to industry lobbyists, the VDA. However, the UK is the fourth-largest market for BMW.

While he said it was too early to tell whether no-deal tariffs would affect the long-term future of the Oxford plant, Mr Peter said BMW was “flexibly positioned” when it came to Mini production.

The company also had options to expand production in Germany and China, he said, where it is developing an electric version of the car.

The group, which also owns Rolls-Royce, recently announced it would move some Mini production from the Netherlands to Leipzig, in Germany.

Mr Peter said that BMW was “not involved” in negotiations between the EU and UK, but hoped “that in the end a reasonable solution will be found”. – Copyright The Financial Times Limited 2020

4 How affordable is housing for first-time buyers?

6 Opposition to Chawke’s apartments, BBC in mourning, and housing affordability