Appeal by mixed martial arts superstar has been thrown out 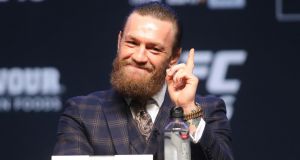 Conor McGregor announced his retirement from mixed martial arts last June but is due to fight Dustin Poirier next month. Photograph: ©INPHO/Tom Hogan

Mixed martial arts superstar, Conor McGregor’s bid to cash in on his brand across the EU has suffered a knockout blow.

The boards of appeal at the EU brand registry threw out McGregor’s appeal against a decision earlier this year to reject the name Conor McGregor as a trademark for the sale of clothing across the EU.

McGregor’s move was opposed by a Dutch-based firm McGregor IP and the decision brings to an end an almost four-year “brand war” between the two companies at the EU Intellectual Property Office.

In the eight-page letter sent to McGregor’s Dublin based trademark and patent lawyers, FR Kelly, the appeals board said he has the option of appealing their decision to the General Court of the EU based in Luxembourg. Any appeal must be lodged within two months.

The boards of appeal found that the appeal lodged by the Conor McGregor company “is not well founded”.

Last June, McGregor announced his retirement from mixed martial arts but will add to his coffers when he returns to the Octagon next month where he is due to fight Dustin Poirier.