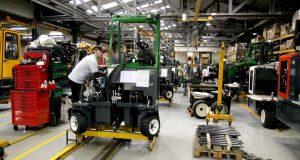 The headline PMI was little changed at 55.5 in January from the previous month’s 55.7 reading. Photograph: David Sleator

Overseas demand for Irish manufacturing was robust in January with a fifth successive monthly expansion in new export orders and increased demand from the UK despite Brexit and the weak sterling.

Manufacturing in the Republic generally expanded during the month, with new orders recording their highest growth in 18 months, according to the latest Investec Manufacturing PMI Ireland report.

The headline PMI was little changed at 55.5 in January from the previous month’s 55.7 reading. The 50 mark separates growth from contraction.

A key highlight within the report is the new orders component, which recorded its fastest pace of growth since July 2015. Panellists reported higher demand from both new and existing clients.

Overseas demand performed well, with some respondents indicating higher new orders from the UK, which the report noted was “somewhat surprising” given recent currency moves.

Higher new orders led to a further accumulation in backlogs of work. In response to this, manufacturers added to payrolls, as they have done in each of the past four months.

Despite a further expansion in the quantity of purchases, albeit at a somewhat slower pace than in December, recent trends in the depletion of both stocks of purchases and stocks of finished goods continued.

On the margin side, the rate of input cost inflation accelerated sharply during January to the fastest since October 2012.

There were a number of factors behind this, including higher commodity prices, the weakness of the euro against the US dollar and price rises at UK suppliers.

Some firms were able to pass on at least a portion of these cost pressures by hiking output prices as they have done for eight successive months.

Nonetheless, the profits component dipped back into negative territory after posting a modest increase in December.

The future output index showed more than 90 per cent of firms expect to see output levels either being maintained or increased over the coming year, indicating that sentiment on the whole remains positive.

In Asia, China’s official factory gauge also started the year on a healthy note, with a PMI of 51.3 in January, compared with 51.4 in December.

Stocktake: History says this is not a bear market rally 05:30
Joint accounts: if one of us dies, can the other access the money? 05:30
Covid-19 has turned the volume up on musicians’ cut from streaming 05:27
Lucinda Creighton’s consultancy agrees partnership with US lobbyist 05:18
GDPR is two years old but still lacking resources 05:16
Search executive
jobs on irishtimes.com