Software used on Max training simulator is unable to reproduce some flight conditions, including conditions which led to the crash of Ethiopian Airlines flight ET302 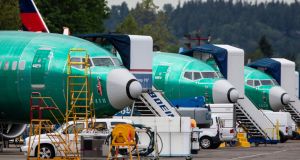 Boeing has been forced to correct a flaw in the software of flight training simulators that are meant to reproduce the flying conditions of the 737 Max aircraft involved in two deadly crashes in the past six months.

The disclosure of a problem with the simulator software is a further blow to the credibility of the Boeing brand, which has been seriously damaged in recent months by the two crashes, in which 346 people died.

Subsequent disclosures of serious design flaws both in the anti-stall system of the Max, the manoeuvring characteristics augmentation system (Mcas), as well as errors involving other safety systems have further undermined the reputation of the world’s largest commercial aircraft maker.

Boeing revealed at the weekend that the software used on the Max training simulator was unable to reproduce some flight conditions, including the conditions which led to the crash of Ethiopian Airlines flight ET302 on March 10th.

The preliminary crash report from the Ethiopian authorities revealed that the pilots of that flight were flying at high speed and were unable to overcome the power of the Mcas system as it drove the plane’s nose down by doing what Boeing had told them to do in such circumstances: use a manual wheel in the cockpit to bring the nose back up.

“Boeing has made corrections to the 737 Max simulator software and has provided additional information to device operators to ensure that the simulator experience is representative across different flight conditions,” Boeing said in a statement.

“These changes will improve the simulation of force loads on the manual trim wheel. Boeing is working closely with the device manufacturers and regulators on these changes and improvements, and to ensure that customer training is not disrupted.”

The problem with the simulator was first reported in the New York Times.

Most airlines trained pilots to fly the Max aircraft, a variant of the 737 which has been flying since the 1960s, on a simulator designed for the 737 NG, predecessor of the Max. Regulators did not require training in a Max simulator and there is only one Max simulator in use by airlines in North America: at Air Canada.

The Federal Aviation Administration is not currently recommending that airlines retrain pilots on a Max simulator before the aircraft return to the skies, expected to begin in August. This issue could be a matter of contention at a May 23rd meeting of global regulators which will draw up plans for returning the grounded Max to service, including plans for pilot training.

Some US pilots unions are recommending training on a Max simulator but only after the planes return to service, and some US airlines have been ordering Max simulators for that purpose. American Airlines said it expects to receive a Max simulator in December.

“Again we seem to hear one thing from Boeing and then months later we hear something else. Boeing seems to have a penchant of telling us one thing in private and another in public.” – Copyright The Financial Times Limited 2019