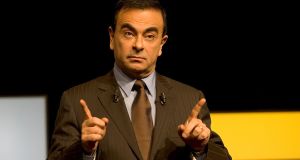 The request, an Interpol red notice that calls on authorities to arrest a wanted person, was received by Lebanon’s internal security forces and has yet to be referred to the judiciary, the source said.

Mr Ghosn fled to Beirut from Japan, where he faces trial for alleged financial misconduct. Lebanese government officials could not immediately be reached to say what – if any – action would be taken. The source, who spoke on condition of anonymity, said no decision had been taken with regards to the warrant.

In past cases, where Lebanon has received red notices for Lebanese citizens resident in the country, the suspects have not been detained but their passports have been confiscated and a bail has been set, the source said.

Mr Ghosn decided to flee Japan after learning that his trial had been delayed until April 2021 and also because he had not been allowed to speak to his wife, sources close to the businessman said on Thursday.

The former executive has become an international fugitive after he revealed on Tuesday he had fled to Lebanon to escape what he called a “rigged” justice system.

Sources close to Mr Ghosn said he learned at a recent court hearing that one of his two trials in Japan would be delayed until April 2021. No firm date has been set for either trial but at least one was widely expected to start in April 2020.

“They said they needed another whole year to prepare for it . . . He was distressed about not being able to see or speak to his wife,” one of the sources close to Mr Ghosn said.

Under the terms of his bail, the executive was prevented from communicating with his wife, Carole, and had his use of the internet and other communications restricted while confined to his house in Tokyo. A request to see or speak to his wife over Christmas was denied, the sources said.

The sources also said Mr Ghosn was unnerved by news that his daughter and son had been questioned by Japanese prosecutors in the US in early December and was convinced authorities were looking to force a confession from him by putting pressure on his family.

No one was immediately available for comment at the office of Mr Ghosn’s lawyer, Junichiro Hironaka or at the French embassy in Tokyo, or at the Tokyo district public prosecutors office.

Mr Ghosn (65) was first arrested in Tokyo in November 2018 and faces four charges for alleged financial crimes in Japan, including hiding income and enriching himself through payments to car dealerships in the Middle East. He denies the charges.

The businessman, who holds French, Lebanese and Brazilian citizenship, was smuggled out of Tokyo by a private security company, a plan that was in the works for three months and involved transit through Turkey, Reuters has reported.

Turkish police detained seven people, including four pilots, as part of an investigation into Mr Ghosn’s transit, a police spokeswoman said. She said the other detainees were two airport ground staff and one cargo worker and all seven were expected to give statements before a court on Thursday. Flight tracking data suggests Mr Ghosn used two different planes to fly into Istanbul and then on to Lebanon.

Japanese public broadcaster NHK said on Thursday that Japanese authorities had allowed Mr Ghosn to carry a spare French passport in a locked case while out on bail to meet a local requirement that all foreigners must carry identification at all times, potentially shedding some light on how he managed to escape.

Japanese authorities have not officially commented on Mr Ghosn’s disappearance. Government offices are shut this week for the new year holiday.

Lebanon has no extradition agreement with Japan and Mr Ghosn enjoys widespread support in the country of his childhood, where he holds extensive investments in banking and property. – Reuters