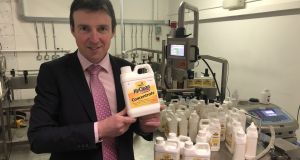 David O’Sullivan was chatting about shortages of alcohol-based hand sanitiser with staff over lunch at his factory in Dublin three weeks ago amid efforts to stop the spread of coronavirus.

A colleague told him their partner worked in office supplies but was having trouble sourcing sanitiser to protect staff in the pandemic. It was a light-bulb moment for O’Sullivan and his staff in how they could respond to this public health emergency.

“Wouldn’t that be helpful if we were able to make it?” he said.

His company Winroy Industrial Polymers normally makes adhesives and sealants but they had some raw material that could be used to make hand sanitiser on a large scale for use in hospitals and elsewhere to stem the spread of Covid-19, the disease caused by the virus.

“I have a grandmother in a hospital in a coma, so you have that side of it too. I thought it could help overall – and there is a self-serving interest too, to take great care of my grandmother,” he said.

“We were ringing around, and we got on to the Department of Health about formulating a hand sanitiser. As much as we want to help out, we didn’t want to get in trouble.”

The Department of Agriculture, Food and the Marine – and, more specifically, the department’s pesticides registration and control division – approves and provides registration hand sanitisers appearing on the market to ensure they are effective but also safe for use.

The department has been fast-tracking its process to get as much hand sanitiser out as quickly as possible. Staff internally have been redeployed from other areas and are working extra hours to process 85 requests to expedite applications for hand sanitiser products since March 4th.

A target has been set by the department to ensure application processing starts within a day of their receipt. A registration number allows customers know that the sanitiser contains the correct amount of alcohol to sanitise. At least 60 per cent alcohol by volume is required to be effective.

Department officials walked O’Sullivan and his staff through the process and they received “notified” status from the department’s PRCD unit so they could start production immediately.

“Usually it takes eight months but they expedited it over two weeks,” said O’Sullivan.

“Everyone has to do what they can to tick through and hopefully we can get through it.”

The company could produce between two and six tonnes of hand sanitiser a day, he says, and the factory is operating two eight-hour shifts a day among his 40 staff over the coming two weeks.

“If you can keep the lads busy at this time to pay mortgages, it is good to be doing something good but it doesn’t hurt either,” said O’Sullivan.

The huge demand from the HSE and hospitals around the country but the company has encountered two problems: he has run out of bottles for the sanitiser and he is facing a shortage of raw materials for future production.

One long-term supplier of an chemical material - Isopropanol, or IPA as it is known for short - that is used to make the hand sanitiser charged the Dublin company five times more for an order within two days of the cheaper order.

They later told O’Sullivan they could no longer supply him.

“It has come from higher up that the product wasn’t to leave the country. Every country is scrambling for it not to leave their soil,” he said.

“To an extent, it has become a political issue. We will manufacture whatever we can get our hands on but we are limited with that.”

Several products have been sold without appropriate registration and these have been notified to the department, which is contacting the relevant companies directly, a spokeswoman said.

Another company, Hygeia, the Galway agri-chemicals and garden product business, spotted a gap in the market for an anti-virus disinfectant spray and concentrate for home and work use. It received fast-track approval from the department for a new product called HyClean Anti-Virus.

Its production line is up and running and the company is battling to keep up with demand for a product being supplied to DIY stores Woodies, Dairygold Coop Superstores and Homeland.

The product is aimed at reassuring people that their homes and workplaces are as clean as they can possibly be at a time of such uncertainty, says John Byrne, chief executive of Hygeia.

“There is a level of anxiety that exists in communities, amongst everyone, not just in Ireland and the UK, but across the world in respect of the unknowns around this virus,” he said.

“Everything in people’s lives is so controlled and people are in control but with this epidemic now nothing is in control and everybody is vulnerable and at risk.”