O’Neills sportswear to lay off 900 staff 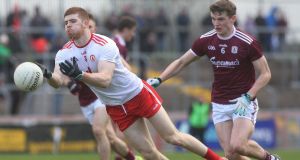 O’Neills, which is more than 100 years old, supplies sportswear to GAA clubs and has a number of sportswear stores. Photograph: Inpho

Irish sportswear manufacturer O’Neills is to lay off around 900 staff and suspend operations until at least May as a result of coronavirus.

The managing director of O’Neills Irish International Sports Co, Kieran Kennedy, said the company had “no alternative” but to take these “drastic measures to safeguard its long-term future”.

The decision was a result of the “postponement and cancellation of sporting activities, and the complete cessation of orders received from clubs and retailers across the business”, he said.

However, Mr Kennedy said the firm wanted to “make categorically clear this is not a closure, it is a pause based on circumstances beyond our control”.

“We fully intend to be back in action stronger than ever as soon as possible,” he said.

O’Neills, which is more than 100 years old, supplies sportswear to GAA clubs, and has a number of sportswear stores. The company employs around 700 people in its factory in Strabane, Co Tyrone, and around 200 in Walkinstown in Dublin.

It hopes to retain a small number of staff on a temporary basis to service existing customer requirements.

In a statement Mr Kennedy said the decision to temporarily suspend operations as of 6pm on Thursday, March 19th, had been taken with “deep regret”.

“Unfortunately this will result in all staff being subject to temporary lay-off. It is not yet known for how long this will continue. However, given the latest information to hand it is likely to be until Tuesday, May 5th, at the earliest.”

He said he was aware of the strain this placed on many loyal and dedicated staff, and the company wished to again convey its sincerest apologies to every employee affected.

“This closure is unprecedented in our 102-year history, and this decision has not been made lightly.”

Sinn Féin MLA Maolíosa McHugh said it was a “devastating blow” to the Strabane area. “This has been a major employer in the town for many years, and its loss will have a huge impact on the local economy in Strabane and across the wider northwest.”

SDLP MLA Daniel McCrossan said it was “vital” workers were given adequate financial support to help them through this “unprecedented time”.

7 High levels of public investment to be maintained for coming years, Donohoe says