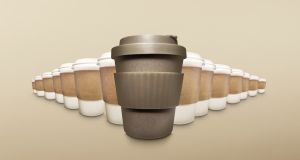 It is against Irish Rail company policy for passengers to receive hot drinks directly in reusable cups Photograph: iStock

Irish Rail commuters have expressed anger over the company’s refusal to allow the use of reusable cups on train services.

While InterCity trains offer catering, it is against company policy for passengers to receive hot drinks directly in reusable cups. “We cannot currently accommodate [passenger] keep cups on our service,” Irish Rail spokeswoman Jane Cregan said. This was due to staff health and safety concerns and the fact of a limited supply of water on train services, she said.

While Irish Rail is “committed to operating in an environmentally sound manner”, rail users said such examples not only contradict that statement but defeat the purpose of reusable cups.

Andy Cochrane from Celbridge, Co Kildare, who takes InterCity trains about twice a month, was told on a recent trip to Belfast on the Enterprise train that she could not have a hot drink poured into her reusable cup.

She said the assistant, who was using a catering trolley to serve customers in the carriages, told her it was “a health and safety issue if I can’t balance your cup properly under the spout”.

50 tips for a more sustainable
(and cheaper) Christmas

Ms Cochrane said she was confused by this, as she had used a reusable cup previously on trains. “I assumed the trollies are much of a muchness. But [the catering staff] said, ‘No, no, no. I have to sell you a cup’.”

On the health and safety issue, Irish Rail said that “trialling different-size cups under the spout could lead to the catering attendant being burned”. It confirmed that catering staff tally the number of sales with the number of cups left.

On a later trip on the Enterprise, Ms Cochrane noticed an advertisement featuring reusable cups for sale, with a “10 per cent discount on all hot drinks when using an Enterprise Keep Cup”.

Irish Rail said that “as a response to demand for keep cups, corporate catering sourced keep cups that fit under the spout of the trolley and also have a closing mechanism that is completely safe”.

To avail of a hot drink in a reusable cup, passengers have to buy a branded Enterprise Keep Cup, and all other cups – regardless of size – it seems, are blacklisted.

Ms Cregan confirmed on RTÉ’s Today with Sean O’Rourke that Irish Rail considered the matter a health and safety issue.

Keep cups came in different sizes with different closing mechanisms and they might not fit under the spout on the catering trolley, she explained.

“We’re responsible for serving these beverages, it is something we have to be careful of, it’s not that we cannot trust passengers to know that their keep cup is safe.

“It is something that we are looking into,” she said.