US company is offering €356m for plastics firm 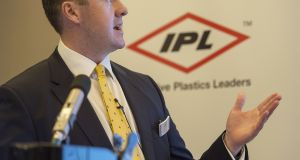 IPL Plastics is a step closer to a €356 million sale to US investor Madison Dearborn after likely bidders decided against offering a higher price for the Irish Canadian manufacturer.

Madison Dearborn is offering $555 million Canadian dollars (€356 million) for IPL, but a “go-shop” clause in the deal allowed the plastic container maker 30 days to establish if others were prepared to pay more for the business.

IPL confirmed on Friday that 14 of 57 potential bidders approached by the company’s advisors, BMO Nesbitt Burns, expressed interest in a deal.

“All 14 prospective purchasers subsequently informed BMO that they were no longer interested in pursuing a transaction with the company and no superior proposal was received during the go-shop period,” IPL said.

Prospective bidders entered confidentiality and standstill agreements with IPL before being given private information on the company.

An IPL circular to shareholders pointed out that as no superior offer had emerged, the go-shop clause expired at 11.59pm on Thursday night, August 27th.

News that no other offer emerged from the go-shop exercise and that the clause has expired paves the way for IPL stock holders to vote on a sale to Madison Dearborn.

IPL will hold a shareholders’ meeting on September 28th to ask investors to vote for the deal, which still needs a minimum 66 per cent majority to go through.

Friday’s circular pointed out that IPL’s board was unanimously recommending the Madison Dearborn deal to shareholders.

IPL has a number of Irish shareholders, including businessman and solicitor, Noel Smyth’s Fitzwilliam Finance Corporation, a company linked to beef processor Larry Goodman and several co-ops, including Kerry.

They are understood to favour a sale. After the company’s annual general meeting in June, Mr Smyth confirmed that he wanted to urge the board to consider selling to arrest a fall in IPL’s share price.

The company has factories in the Republic, Canada, the US, the UK, Europe and China.

Earlier this month, IPL Plastics reported that its earnings slumped 37 per cent in the second quarter as Covid-19 lock downs hit sales.

The company’s net profit fell to $5.3 million US dollars (€4.5 million) from $8.5 million (€7.1 million) for the second quarter of last year, with revenue declining 9.1 per cent . IPL reports its results in US dollars.

After the group announced details of the Madison Dearborn offer and the go-shop clause, analysts suggested that there was only a slim chance of a better bid emerging.

Madison is offering a 150 per cent premium to IPL’s price in May, before rumours of a bid began circulating.

The price is also a 69 per cent premium on the average at which the company traded on the Toronto Stock Exchange for 20 days up to July 28th, the day before details of the Madison Dearborn offer emerged.

Venture capital and private equity investor, Madison Dearborn, has invested in more than140 businesses since it was founded 28 years ago. The firm has raised $26 billion from its backers during that time.