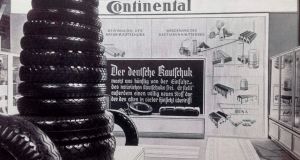 A handout picture believed to be taken in 1937 at an undisclosed location and released by Continental on August 27, 2020 shows Buna synthetic rubbers presented at a Continental booth at a fair in Germany. Photograph: Continental/AFP via Getty

Continental, one of the world’s largest car parts makers, was a “pillar” of the Nazi war effort and exploited about 10,000 forced labourers, according to a study commissioned by the German company.

The 870-page study found that Continental was “one of the most important suppliers” to the Third Reich, manufacturing car and aircraft tyres, as well as track pads for tanks, hoses, hydraulic brakes and precision instruments for V-1 cruise missiles.

The Dax-listed group first commissioned the report by professional historian Paul Erker in 2015, but has lagged some other major German companies in examining their role during the Nazi era. Daimler, BMW, and supplier ZF have been the subject of similar reports, while Volkswagen began investigating its role in the Nazi war effort in the 1980s.

“The study shows that Continental was an important part of Hitler’s war machine,” said chief executive Elmar Degenhart, who added that the research was necessary “in order to gain more clarity about the darkest chapter in our company’s history”.

Continental’s report, produced by Mr Erker of Munich’s Ludwig Maximilian University, found that in the 1930s the company’s executive board had “welcomed the Nazi seizure of power with euphoria,” and expunged Jewish members of its supervisory board, in a process of “Aryanisation”.

The company’s wartime chief executive Fritz Könecke, who later went on to become the boss of Mercedes-owner Daimler in the 1950s, was “opportunistic”, and at best ambivalent about collaboration with the Nazi regime, the study concluded.

Mr Erker, who has written histories of companies including Bosch, found that towards the end of the war, workers forced to perform tasks such as testing the soles of shoes were “exploited and maltreated to the point of debilitation and death”.

Concentration camp prisoners, who were used for the production of gas masks, “were subjected to inhumane living and working conditions,” the report added.

At a press conference on Thursday, Continental, which also examined the wartime roles of companies it has acquired over the past few decades, said that it had tried to find survivors of the forced labour, but they had all passed away.

Continental joined the EVZ Foundation, which was set up to compensate forced labourers, in the 1990s, and Mr Degenhart said the group had contributed a “two-digit million” amount to the organisation’s fund.

But the 61-year-old, who has been in charge of Continental for over a decade, added that the company was “not simply drawing a line under the past”.

The findings of the study would be incorporated into Continental’s staff training programmes, and that the manufacturer would sponsor an academic scholarship for research into German corporate history during the Nazi era.

When asked why Continental was relatively late in commissioning a report into its past, Mr Degenhart conceded it was “overdue”, but added: “I can’t speak for former management, and don’t want to reproach them.”

He urged other German businesses who have not yet done so to examine their own archives.

“Any company that has not confronted its role in history should do so,” the former Bosch and Schaeffler executive said, stressing that a closer understanding of the crimes of the past were instructive to current managers.

“I personally ask myself the question: ‘If I had been in that situation, how would I behave?’” – Copyright The Financial Times Limited 2020