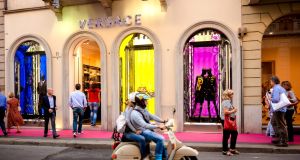 Italy’s luxury sector is dominated by world-renowned brands from Gucci to Valentino and Versace, but it is tens of thousands of small family businesses that form the backbone of the country’s €78 billion fashion and leather industry.

For many of these artisan businesses, however, the Covid-19 outbreak has been “the last straw”, said Fabiano Ricci, a shoe designer in Monte Urano, Fermo, who produces shoes for his own brand and international fashion houses.

In the 1990s, half the houses in the central Italian province of Fermo and neighbouring Macerata had a clothing factory in their back garden. Global competition, high labour costs and several recessions forced many artisan outfits across Italy to close, with those that survived doing so by expansion.

Yet for some, their size is proving a burden. Forced to retain employees despite having little or no work, many are struggling to survive.

Mr Ricci employs six people, which he says has helped his factory pull through the pandemic. “I have low fixed costs and variable production ones and I’m struggling, I can’t imagine those who face the costs of multiple fixed-term employees.”

The fashion industry is worth almost 1.5 per cent of Italy’s GDP, with more than 83,000 active businesses, according to Mediobanca. The majority of these are small companies, employing almost half a million people.

“Most suppliers have seen orders drop by around 40 per cent. Business owners are stuck between a rock and a hard place because they can’t fire workers but they can’t recover their revenue either,” Mr Ricci said.

Fashion houses such as Kering, the French luxury group behind Gucci, and Prada suffered hits to profit as well as revenues in the first half. Analysts do not expect the sector to recover its 2019 revenues for at least two or three years and the Italian fashion chamber expects revenues to slump 30-40 per cent this year.

The Italian government has imposed a ban on redundancies until November to curb unemployment. While many contract workers were let go, most permanent employees have been furloughed since March. Under the state scheme, companies’ employee costs are mainly covered by the government, and furloughed staff are not allowed to work.

The owner of a leather manufacturer in the nearby town of Porto Sant’Elpidio admitted that some of his furloughed employees were working, however. “I feel awful but the situation is simply not economically sustainable,” he said on condition of anonymity. The factory, which employs 14 people, was shut for more than two months, with most first-half orders put on hold. It is gradually resuming production.

Like many suppliers, 40-year-old family business Valentino Orlandi, in the town of Corridonia in the Marche region, was able to avoid furloughing staff because of a decision to start producing personal protective equipment.

“There was a shortage of PPE ... and we decided to contribute [to the government appeal],” said Cristina Orlandi, who runs the €1 million business with her parents and sister.

The company, which exports luxury leather bags to more than 80 countries, is now selling face masks to the public online and says a shift to digital has proved a lifeline.

But such a switch is not an option for many. Unions in the northern province of Como, where 80 per cent of European silk is made, said about 15,000 workers in the sector had either been furloughed or had contracts terminated.

Silk makers in Como serve the biggest fashion brands, but they had already been losing ground to international competition, especially Chinese, over the past two decades. Now, many face extinction and some business leaders are furious that Rome has offered loans rather than subsidies to help suppliers to survive the pandemic.

“Fashion companies’ results show an average drop in revenues of around 30-40 per cent. This obviously has a devastating impact on suppliers,” said Carlo Capasa, president of the Italian national fashion chamber.

“The only way to safeguard the sector is for the government to step in and recognise that fashion and its supply chain is a truly strategic industry for the country, something Italy excels at globally.”

In recent years major brands have offshored parts of their production to Asia and eastern Europe where labour costs are significantly lower. “Workers in Italy cost companies almost three times their net salary, whereas in Asia or eastern Europe salaries are lower and the tax wedge almost non-existent,” said one fashion executive.

Despite the costs, more than 40 per cent of the total clothing production in Europe is made in Italy where, historically, the quality of the finishings and materials has been hard to match.

But beyond the pandemic, many fear that technology and globalisation have outpaced Italian craftsmanship and expertise, and the trend will be hard to reverse without massive investment and lower labour costs.

“We are losing the characteristics that have allowed us to survive until today,” said Mr Ricci. “It’s like going to war with knives when everyone else has bombs.” – Copyright The Financial Times Limited 2020