Ardagh upbeat on back of debt refinance and Trivium deal 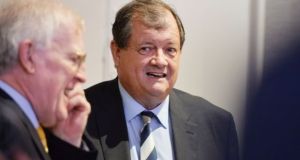 Glass and metal containers giant Ardagh has reported a 1 per cent decline in revenues for the third quarter to $2.37 billion (€2.13 billion) although the group noted that sales had risen 2 per cent when measured on a constant currency basis.

The Paul Coulson-led business also announced the completion of a deal with Exal to fold its food and specialty business into Trivium Packaging, a joint venture in which it will hold a 43 per cent stake. Ardagh received $2.5 billion in cash as part of the transaction.

The business also executed a debt refinancing during the period that it expects to deliver $45 million in annual savings.

“We took advantage of favourable markets during the quarter to further improve our debt maturity profile and obtain material interest savings. We completed the Trivium transaction today, with cash proceeds of $2.5 billion to be used for debt reduction,” Mr Coulson said.

The group recorded earnings before interest, tax, depreciation and amortisation (Ebitda) of $424 million, up 6 per cent on the same period a year ago, led by gains in its European glass packaging and Americas metal beverage packaging divisions.

Ardagh recorded revenue of $412 million in its European metal beverage packaging business in the third quarter, down 1 per cent versus the same period a year ago. Turnover at its American beverage packing division was up 5 per cent to $465 million.

The company’s European glass packaging business recorded a 1 per cent decline in revenues to $414 million, while the US division saw turnover rise 1 per cent to $438 million.

The group announced plans to combine its good and speciality metal packaging business with Exal in July. The remaining 57 per cent of the joint venture will be controlled by Ontario Teachers’ Pension Plan Board.

Following completion of the Trivium deal, Ardagh has issued conditional redemption notices in respect of €440 million in 4.125 per cent senior secured notes due 2023 and $1 billion in 4.625 per cent notes, that fall due for repayment the same year.