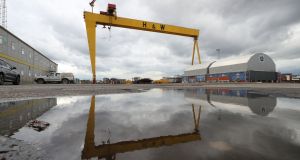 InfraStrata has paid a cash deposit of £500,000 to the administrators to secure exclusivity over the Harland & Wolff assets. Photograph: PA Wire

The company that plans to buy the principal assets of Harland & Wolff has not yet signed an asset purchase agreement or made a scheduled £3.3 million payment to the administrators of the east Belfast shipyard, it has confirmed.

InfraStrata, which signed heads of terms on October 1st to buy the assets of the historic shipyard from administrators BDO Northern Ireland for £6 million, said “due diligence and negotiations to satisfy the acquisition conditions” are still under way.

The London AIM-listed group, which develops global energy infrastructure projects, paid a cash deposit last month of £500,000 to the administrators to secure exclusivity over the Harland & Wolff assets.

Under the terms of the acquisition InfraStrata was scheduled to pay the remaining £5.5 million in two tranches: £3.3 million by October 31st and £2.2 million by April 30th, 2020.

However, the terms also allowed that if InfraStrata had not completed its due diligence on or before October 31st then a backstop date of December 31st, 2019, would come into force.

According to InfraStrata it hopes to complete the acquisition of the assets of Harland & Wolff before the pre-agreed backstop date.

”We are working diligently, together with the various stakeholders, to complete the deal, and we are pleased to see due diligence and negotiations at a very advanced stage,” said John Wood, chief executive of InfraStrata.

“We remain committed to signing an asset purchase agreement as soon as is practically possible, and look forward to providing further updates when the remaining items are finalised.”

The company had previously outlined that it intended to fund the remaining £5.5 million that it owes to the administrators of Harland and Wolff by a “debt and equity mix”.

Last month InfraStrata confirmed to The Irish Times that “discussions with lenders are ongoing”.

While the due diligence process and negotiations in relation to the acquisition continue, InfraStrata said it no longer intended to follow through with its initial plans to “utilise” the assets of Harland & Wolff in November.

“To ensure that this process is completed as quickly as possible, the company will not start utilising the assets under a licensing arrangement until the proposed acquisition is complete,” InfraStrata said.

BDO Northern Ireland has not commented on the nature of the negotiations in relation to finalising the asset purchase agreement with InfraStrata.

The terms of the acquisition outline that while the company has entered into an exclusive agreement regarding the acquisition of the assets of Harland & Wolff, “any transaction remains subject to a number of factors” which include approval of transfer of leasehold agreements to the company, completing due diligence and funding arrangements.

“As such there can be no certainty that a final binding arrangement will be reached to enable the acquisition to proceed,” it states.