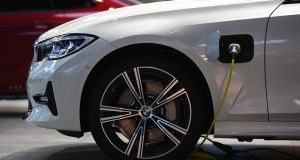 BMW ended an upbeat quarter for European automakers by warning that the rapidly resurging coronavirus pandemic could wreck a sales recovery driven by strong demand in China. Photograph: Andreas Gebert/Bloomberg

BMW’s third-quarter profit rose almost 10 per cent thanks to Chinese demand for luxury cars, but the German automaker warned a new wave of coronavirus infections sweeping Europe and the United states posed a “considerable” risk to its business.

Sales of luxury cars reached a new record in the quarter, but the cautious outlook sent BMW shares lower on Wednesday.

“After a more stable phase in the economic environment in the third quarter, the pandemic is now clearly regaining momentum,” BMW said.

“If the pandemic takes an even more serious course and the global economy experiences a perceptible downturn, the risk exposure could be considerable, particularly on the demand side.”

Like rival Mercedes, BMW’s quarterly pretax profit recovered in the third quarter, rising 9.6 per cent to €2.46 billion, lifted by an 8.6 per cent increase in deliveries of luxury cars.

The automotive EBIT (earnings before interest and tax) margin rebounded to 6.7 per cent, from minus 10.4 per cent in the second quarter and 6.6 per cent a year earlier.

Deliveries of BMW-branded vehicles jumped of 9.8 per cent during the quarter, mainly thanks to a 31 per cent spike in China, which helped offset a 15.7 per cent drop in demand in the United States, where the pandemic has hit sales.

BMW reiterated it expected to achieve an automotive EBIT margin of 0 per cent to 3 per cent this year.

Despite a recovery in demand in some markets, overall deliveries of high-end vehicles as well as group pretax profit are expected to be significantly lower than last year, it said.