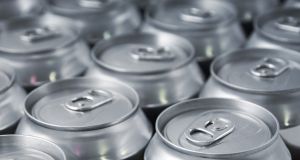 Ardagh Group, a manufacturer of glass and metal containers led by Dublin financier Paul Coulson, said on Thursday it planned to invest more than $1.8 billion (€1.5 billion) over the next four years, mainly on expanding its drink cans business, as it looks beyond uncertainty posed by Covid-19.

The group’s largest-ever capital investment programme, following two decades of deals-driven growth by Mr Coulson, is aimed at taking advantage of an expanding international market for canned energy drinks, flavoured beverages and craft beer as well as an ongoing shift away from plastic packaging.

Speaking on a call with analysts, Mr Coulson said the planned returns from the investment were more attractive than those from mergers and acquisitions at the moment, as deal valuations remain high. Shares in the company had jumped 8 per cent by lunchtime trading in New York.

The investment programme is in addition to $250 million in capital expenditure being made in 2019. Some 15 per cent of the total is being earmarked for its glass containers business.

Ardagh said that the programme would be funded from existing cash resources, cash being generated by the business in the coming years and, “where necessary, incremental debt”. However, it plans that the earnings benefit from the investment will serve to reduce the group’s debt burden.

The company had $1.23 billion in cash and cash equivalents and access to $661 million under undrawn credit facilities at the end of September.

The investment announcement came as Ardagh, which makes drink containers for brands ranging from Budweiser to Coca-Cola, reported increases in sales and earnings in the three months to the end of September from the same period last year, as it benefited from a reopening of western economies following widespread lockdowns earlier in the year.

Revenues rose 4 per cent to $1.8 billion, also helped by favourable currency movements, while earnings before interest, tax, depreciation and amortisation (ebitda) grew 3 per cent to $330 million.

The performance during the quarter was a marked improvement from the three months to June, when sales dipped 6 per cent on the year to $1.61 billion as global lockdowns hit bottled drinks sales in cafes, bars and restaurants, even as drink cans sales rose as essential retail outlets remained open.

While Ardagh benefited from a relaxation of Covid-19 restrictions during the third quarter, many western economies are tightening controls again amid a fresh surge in virus cases.

“The ultimate significance of the impact of these disruptions, including the extent of their adverse impact on our financial and operational results, will be determined by the length of time that such disruptions continue, which will, in turn, depend on the duration of the Covid-19 pandemic, the impact of governmental and other regulations in response to the pandemic and the resulting effect on macroeconomic activity and consumer behaviour,” Ardagh said.