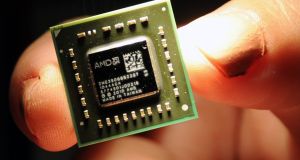 Advanced Micro Devices plans to use the acquisition to broaden its business into chips for 5G wireless communications and automotive electronics. Photograph: Sam Yeh/AFP via Getty Images

Advanced Micro Devices (AMD) has agreed to pay $35 billion in stock for Xilinx, in a deal aimed at reshaping one of the computer chip industry’s pioneers.

AMD, known mainly as Intel’s longtime rival in microprocessors that power most computers, plans to use the acquisition to broaden its business into chips for markets like 5G wireless communications and automotive electronics.

The transaction could also help AMD grab a bigger share of component sales for data centers and counter a prominent rival, Nvidia, which is also bulking up.

The all-stock deal, announced on Tuesday along with AMD’s third-quarter financial results, would be close to the most valuable acquisition in the chip industry’s history. Those bragging rights are currently held by Nvidia for its proposed $40 billion deal for British chip designer Arm, which was announced last month.

Xilinx has had a presence in Ireland since 1995, and currently employs 300 people in Dublin, Cork and Belfast.

Chip makers have experienced several consolidation waves, driven by factors such as duplicate product lines and cost-cutting strategies. But AMD, which is enjoying some of the most robust sales in its 51-year history, expects Xilinx to expand its business while boosting profits.

Lisa Su, AMD’s chief executive, said Xilinx would help establish her company as “the partner of choice for the largest and most important technology companies in the world”.

That sort of reputation has long eluded AMD, which for decades was seen as an Intel follower that mainly won sales with lower prices. But the company has lately grabbed a lead over Intel in some key measures of computing performance, while its larger rival has suffered technological and financial stumbles.

Xilinx, founded in 1984, is the biggest maker of chips that can be reconfigured for a variety of specialised tasks after they leave the factory. Such field programmable gate arrays, as they are called, have long been particularly popular in telecommunications applications, such as cellular base stations now being upgraded for the latest 5G technology.

Xilinx has also been one of the biggest chip companies hurt by trade limits on China’s Huawei, a major maker of networking equipment that is one of Xilinx’s biggest customers. – New York Times