First drive: The 118d delivers a fun drive in a front-wheel drive format thanks to smart engineering innovations 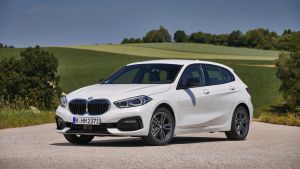 BMW 118d: the mix of engaging steering and smooth power delivery, combined with a smart modern cabin, is enough to justify its premium badge

They say necessity is the mother of invention.

When BMW’s bean counters decided to forgo the company’s trademark rear wheel-drive format for its smallest range of cars, several major engineering egos took a hit. For years they had sneered at rivals up the road at Audi who had the phenomenal Quattro four-wheel drive format on performance cars, but opted for front-wheel drive for lower powered versions. The putdown from BMW engineers was that these were merely dressed up Volkswagens.

So when BMW’s former chief executive announced in 2012 that the company would opt for front-wheel drive, humble pie was on the menu in Munich. The first iterations, in the boxy 2 Series Active Tourer and small crossover X1 and X2, were functional. That’s hardly surprising: after all BMW could tap into its sister company Mini for lessons in how to do front-wheel drive. Yet the real test was always going to be in the car’s premium hatchback 1 Series range.

And when we arrived to test the latest generation of the car that’s meant to justify a price premium over the likes of the VW Golf or the agile Ford Focus we had our doubts.

Forget about brand snobbery for a second. When you enter the world of hatchbacks two cars stand out: the Ford Focus for its driving dynamics and the VW Golf for its all-round ability. For all its fancy rear-wheel drive the outgoing 1 Series simply didn’t match these cars unless you opted for an M Division tyre-screecher.

With this in mind we got behind the wheel of the new 118d.

BMW engineers take a bow, you can sit at the same table as the Ford Focus engineers. The new car has the agility to twist and turn through the bends without dragging its front nose a the straight line.

The curse of front-wheel drive cars has always been understeer. Thanks to some electronic wizardry BMW has managed to find a potential cure.

Faced with the order to put the power through the front wheels, the Bavarian engineers looked not to rivals but to its own electric car. In yet another way the i3 reasserts its place as the most innovative production car in the last decade. I’m convinced the i3 is a future collector’s car, one of those models that will be a landmark in automotive history. It’s electric, it’s built with carbon fibre, uses recycled materials and now it can claim to have offered a solution to understeer.

The issue with electric cars is that so much power is delivered so quickly to the front wheels that they struggle to retain grip. Wheel spin on the front wheels isn’t fun, especially when you are also trying to steer through a corner using those same wheels. So BMW came up with an anti-slip electronic software programme for the latest i3 that relays information on wheel slip three times faster than traditional traction control systems. That’s relatively easy to achieve using an electric motor that switches on an off like a light switch. It’s much more of a challenge when power is coming from a combustion engine. But they’ve managed to deliver it.

Branded with another silly abbreviation –ARB – in the driving seat it means you can bring noticeably more power into, through, and out of a bend than you could normally do on a front-wheel drive car. Combined with a well-weighted steering feel, it means the front-wheel drive hatch is engaging and fun to drive, even more so than its predecessor.

Cynics will point to the fact that the higher end variants of the new generation – the 190bhp 120d and 306bhp M135i – are only offered in four-wheel XDrive format. But that ignores the innovative magic that BMW engineers have achieved with its lower-powered versions.

And these higher-powered models are only occasionally four-wheel drive. While it does boast a mechanical limited-slip differential on the front axle, the xDrive system in this car is from Haldex, with the maximum power split of 50:50 between front and rear. Most of the time – at lower speeds and on dry roads – the front wheels do all the work.

BMW still believes rear-wheel drive is best for delivering – which is why the fantastic 2 Series coupe range will remain rear-wheel drive – but it accepts that for many buyers in the family hatchback market the extra costs and engineering can’t be justified.

Time spent driving the 118d automatic suggests they might be right. The mix of engaging steering and smooth power delivery, combined with a smart modern cabin, is enough to justify its premium badge. Aside from a little wind noise the car was remarkably smooth, while the diesel delivers great wads of torque at the flick of your right ankle.

Inside the new 1 Series thre's a lot more tech and a little more room. BMW has improved the rear seat legroom and bootspace, problem areas for the outgoing model. It’s still not the most family-friendly hatchback out there but it’s better than before. What has improved is the materials and finish of the cabin, along with the addition of a range of the latest tech systems, including optional features like the digital cockpit display and improved voice controls. They are even rolling out a link between your car and your Amazon Alexa account.

Power options in the latest 1 Series start with a three-cylinder 118i petrol putting out 140bhp, with prices starting at €32,100 for the six-speed manual. Diesel options are all four-cylinder engines, starting with the 1.5-litre 116d putting out 116bhp and priced at €32,890 for manual or €34,791 for the seven-speed dual-clutch Steptronic automatic.

Finally there’s the hailo model – the M135i -–putting out 306bhp from its 2-litre four-cylinder turbocharged petrol engine block and priced at €50,830.

That’s a few thousand euro more than a VW Golf Gti, a car that has rightly earned the sort of premium prestige BMW aspires to for its 1 Series. On paper 306bhp would deem this car to be a pocket rocket but in reality it’s more sedate than we expected, and the four-cylinder lacks the throaty roar of a six-cylinder in full song. It certainly warrants the esteemed M Division moniker but it’s not in the same stratosphere as the M2 coupe.

The new 1 Series is best when it doesn’t try too hard to be anything other than a premium family hatchback. When it’s judged as such it deserves accolades for delivering a fun drive in a front-wheel drive format thanks to smart innovations by BMW’s savvy engineers.

If you want full-on hair-raising fun forgo the M135i and spend the money on a 2 Series coupe. However, up against regular hatchback rivals this 1 Series can go wheel-to-wheel with the best of them.

Power: 1,995cc four-cylinder diesel putting out 150bhp and 350Nm of torque with either six-speed manual of eight-speed Steptronic auto.

Verdict: Retains the fun even in front-wheel drive thanks to some innovative engineering