Ford Focus ST: Quick and comfortable but is it worth the price?

High-performance hatch is a pleasure to drive and in many ways it is a VW GTI beater, apart from its price tag 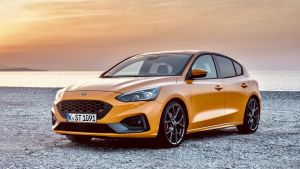 The Ford Focus ST boasts a top speed of 250km/h

Everyone loves a fast Ford and the new 280bhp Focus ST is certainly fast. But can it be loved, when there is the spectre of a faster Focus RS lurking in the shadows?

A comparatively low price point to the RS (it’s still over €40,000 for a fast family hatchback though) should help it reach the 50 or so sales expected next year in the Republic.

The Focus ST’s entry price point is a 2-litre diesel. Wait, a fast Ford burning the devil’s fuel? Thankfully salvation is at hand thanks to the 2.3-litre petrol EcoBoost. The Focus ST comes in five-door hatchback or practical estate form for an additional €1,100. European buyers love Focus estates (roughly a 50/50 split) while Irish’s buyers still prefer the hatchback.

Next to rivals like Honda Civic Type R or Renault Megane RS probably you wouldn’t give the Ford ST a second glance. It has several performance styling cues, sitting 10mm lower on the road for example, but it lacks the RS’s visual menace.

Inside, ST motifs are found in the usual places and brilliant Recaro sports seats up front are very supportive and comfortable. There is a nice sports steering wheel but otherwise it’s pretty much the standard Focus. The driver’s dash display features some extra information about oil pressure, temperature readings and turbo boost pressure.

On a positive note the ST’s head-up display is excellent, but hitting a more negative one, there are cheap materials in places. All is forgiven on that front when you get behind the wheel. If this was a regular family hatch we’d be upset about certain traits of the interior. But Ford has spent its money where it matters: where rubber meets road.

The 2-litre EcoBlue diesel pushes out 190hp and 400Nm to the petrol’s 280hp and 420Nm. The diesel is the most powerful ever fitted to a Focus and produces relatively modest CO2 at 125g/km. It is frugal too, with an average fuel consumption of 4.8 l/100 km. Apart from idle and start up, the diesel is hushed with little in the way of diesel shudder or rattle. A brief test drive confirm the diesel’s effortless cruising ability.

Yet, the diesel, while impressive, is not the ST you want. Our “orange fury” (€1,500 option) hatchback test car featured Ford’s big twin-scroll turbocharged 2.3-litre EcoBoost petrol engine. Ford has revised the four-cylinder that we know from the poor man’s Mustang. In that rear-wheel drive pony it’s no slouch so it is a given that in a much lighter car it has no difficulty in rapidly bringing the horizon closer. From standing start to 100km/h takes just 5.7 seconds (7.6 seconds in the diesel). The new ST 2.3-litre is credited with better in-gear performance than the old all-wheel-drive Focus RS. It’s thirsty though, averaging 7.9 l/100 km (29.8 mpg) fuel consumption with emissions of 179 g/km of CO2.

The ST feels solid on the road and its steering has been tweaked, now beautifully fast and fluid. Power delivery is very smooth and relentless thanks to its highly impressive and class-leading 420Nm of pulling power. The large engine displacement delivers a power dynamic that can effortlessly shift the five door along in any gear, installing confidence behind the wheel.

You can make rapid progress in a very relaxed manner or if you hold the gears to the rev limiter the ST can be a seriously dynamic performer.

A fast car is only as good as its brakes and the ST gets suitable anchors with an electronic brake booster to help scrub off excess speed. The brake discs are bigger and there is less brake fade – an issue with the previous ST.

The quick steering is the star with the slightest input delivering an instant response. It takes just two turns to go from lock to lock. It may lack a bit of road surface feedback, but it’s incredibly engaging. Underneath Focus’s torque vectoring has been returned for the ST. This is an advanced system of traction control, braking the inside wheels in turns, and ultimately letting you keep the power through corners without coming a cropper. The ST can comfortably cruise but can also hustle with the best of them encouraging drivers to take the twisty route home.

The manual six-speed gearbox features a shortened gear throw. A seven-speed automatic with paddle shifters is due later in the year for petrol models only. Anti-lag technology from the Ford GT supercar is used for the first time. In sport or track driving mode the anti-lag system keeps the throttle open when the driver lifts off the accelerator pedal, enabling boost pressure to build faster on demand. It is really noticeable when accelerating in any gear. Ford has added an electronic sound enhancement system to artificially beef up the engine note - first used in the 2.3-litre Mustang.

The new ST is the first front-wheel-drive Ford to get an electronically controlled limited slip differential (an option with diesel versions). The e-LSD is similar to the one used by VW in its GTI performance Golf.

The e-diff – unlike a mechanical diff – can pre-empt wheelspin and when needed split the torque delivery to either driven wheel. This makes it is easier to power away out of the corners and transitions. Our test route was driven in mixed weather and even in damp conditions the ST stuck to the road like glue. Bespoke Michelin Pilot Sport 4S tyres are fitted as standard on the ST.

The ST has three selectable electronic drive modes as standard and operated via steering-wheel-mounted buttons. Normal is the default setting. Sport and a slippery/wet mode also feature. The optional performance pack is essential available in both fuel types. Party tricks like line-lock, rev matching and flat shifting (where you can keep the accelerator buried and shift the manual gears with no clutch) feature along with red brake callipers.

The new ST has a host of high-tech driving safety aids too. Really it is the polar opposite of the first drive by the seat of your pants fast Ford, the 1963 Lotus Cortina. And if you’re not up to handbrake-turning in to a parking space Ford’s active park assist 2 will park for you. Finally, evasive steer assist, a class first, helps drivers avoid collisions by steering around stopped or slower vehicles. The ST even has pothole detection.

Two versions of the Focus ST will go on sale here from next month: an ST2 and higher trimmed ST3. The diesel ST starts from €39,595. Petrol power starts at €41,099, admittedly with active suspension as standard. There is a jump in equipment to ST3 with LED headlights, 19in alloys and full leather seats the headline differences. Ford Focus pricing starts from €22,805.

The Focus ST sits in an odd space. Yes it is quick, fun to drive and a great all-rounder. In many ways it is a VW GTI beater (from €41,595) but the ST is relatively expensive. And let us not forget the elephant in the room: an upcoming RS Focus.