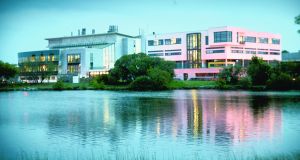 NUI Galway is planning to invest around €200 million on developing disused sites it owns in the city centre.

A judge has criticised Director of Public Prosecutions (DPP) Claire Loftus for her unwillingness to respect a High Court ruling in a legal row over a State bid to seize €210,000 from card payments processor, Pacnet. Barry O’Halloran has the details.

Voters in Western countries may be deeply divided on the issue of immigration but a new study shows many are willing to change their views when presented with the relevant research. Eoin Burke-Kennedy reports

Investment group Tetrarch Capital is in talks with US investor Starwood about a joint venture partnership that would be worth several hundred million euros, and replace the Irish-owned hotelier’s plan for a public flotation, reports Jack Horgan-Jones.

NUI Galway is planning to invest around ¤200 million on developing disused sites it owns in the city centre. Peter Hamilton reports. Peter also interviews Ciarán Ó hÓgartaigh, president of NUIG and hears about his plans for the university.

The Financial Services Union has launched its first ever cross-sector survey, seeking to build a broad picture of working conditions as it seeks to expand its footprint. Joe Brennan reports

An Bord Pleanála has given the green light for a new €40 million hotel at Portobello in Dublin despite its own inspector strongly recommending that planning permission should be refused.

The total pension deficit for Irish publicly-quoted companies widened by 23 per cent last year, largely due to a slump across global equity markets as investors fretted about economic growth and trade tensions, according new figures, writes Joe Brennan.

Our Washington correspondent Suzanne Lynch charts how the immediate threat to Aughinish Alumina has been averted but not lifted permanently.

Finding it hard to stay awake at your desk? Olive Keogh hears that it might be what you are eating.

Laura Slattery picks over this week’s wacky world of business.

Caveat wonders whether Facebook really knows how many fake accounts it has.

The latest in our Brexit Proof series hears the views of Mags Kirwan and her husband Ger who run the Goatsbridge Trout Farm.

1 Karlin Lillington: How I managed to cut my mobile phone bill by at least half
2 Admission of mistake in Oxford vaccine dose raises doubts over reliability
3 State may face €1bn in compensation in Covid-19 case, Press Up claims
4 Smarter ways to heat your home: Eight of the best modern systems
5 Irish Life fund pays €49m for 94 Dalkey apartments
6 Fiona Reddan: Who’s afraid of Revolut? Not AIB and BOI it seems
7 Central Bank rules out changes to mortgage rules during pandemic
8 Cliff Taylor: Deal or no deal we are now heading for a hard Brexit
9 Lahinch Golf Club runs out of its own cash after €3m Covid-19 hit
10 Danish retailer Jysk on track to double Irish store numbers by end of 2021
Real news has value SUBSCRIBE