Inside Track: FeedThePulse co-founder Owen McArdle on what sets his business apart 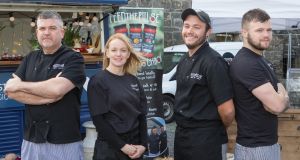 When he lifted the Liam MacCarthy Cup at Croke Park in 2017, Galway Senior Hurling captain David Burke had a special tribute to make to the business that helped them on the way to success. That was FeedThePulse, the Galway-based food business that feeds all of Galway’s GAA teams, as well as supplying Connacht Rugby and Galway United.

Chef Owen McArdle created the business to supply nutritious meals to GAA teams with his wife Helen. They now employ eight people, including their two sons and daughter.

I don’t think we have much competition because of the way we’re designed. When we started off, I was catering to the senior footballers and the food was being purchased by them. There was a lot of white rice and Uncle Ben’s sauces with high sugar content. I thought this can’t be right for guys that are supposed to be a professional set-up, even if it’s an amateur organisation.

What sets us apart is that we don’t use salt, sugar or saturated fats. We use all herbs and spices in our cooking. We’re also working with the Croí foundation to fight heart disease and stroke.

What was the best piece of business advice you’ve received?

Having worked in the catering industry for 30 years, I have a good idea of the business side of things. The best advice I’ve gotten is around cash flow – you’re not a busy fool, you’re making money and it’s basic after that.

We started making a line of fresh, healthy sauces for supermarkets. With overheads and labour costs, we saw there was no margin left for us after production and paying staff. It wasn’t for us.

Your major success to date?

When we got a shout-out from the captain David Burke in 2017, that was the pinnacle of my career so far, even though it wasn’t a financial achievement.

There’s also a company we work with in the Netherlands called DSM. They make protein powder, which we use in some of our products. They called us over to do a demonstration and that was another highlight.

Catherine McGrath. She’s a local lady who set up Galway Free Range Eggs in Cregmore, Claregalway. She set up Cregmore Park Golf Club and she’s in the process of building a hotel. Her energy baffles me. She’s never tired and she never gives up.

Based on your experience in the downturn, are the banks in Ireland now open for business to SMEs?

If you give them a personal guarantee, it’s really risk free to them, it’s one sided. They will give you the money if you have the asset. We didn’t look for money when we started off, but for little bits of loans along the way, they still want their guarantees.

I’m 50 years of age now and they’re still looking for guarantors. When you’re starting a business and you know when you’re doing, they should be more receptive.

If young couples could get on the property ladder, it would go a long way. When people are comfortable and have their nest made, they can work a lot better and we won’t have this brain drain from the country.

Apple in Athenry was meant to employ thousands and it took so long to sort them out, they went elsewhere. Reasonable mortgages and a good work-life balance for employees would help the economy boom.

I’m a workaholic and I feel that I can’t walk away. I run on adrenaline and I don’t take days off. I tend to work seven days a week for eight months. When my break comes, my body is in bits.

It will keep growing. There’s no genius behind it, we cook food that’s good for you and we can prove it. As far as other counties, I don’t think so. We don’t want to scale up that quickly. I don’t know who is supplying Limerick, but they’re doing a good job.

I honestly don’t have a clue, but it’s my baby and you wouldn’t sell your baby.