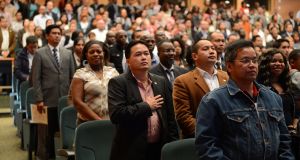 Voters in western countries may be deeply divided on the issue of immigration but a new study shows many are willing to change their views when presented with the relevant research.

The study by economists at the Institute on Behaviour and Inequality in Bonn in Germany disputes the conventional wisdom that immigration sentiment is driven by deep-seated cultural factors.

It found that concerns about the impact of immigration on the labour market – whether it depressed wages or led to greater unemployment – were an important indicator of people’s support for immigration.

But it also found that when voters were presented with research showing immigration had no adverse affects on the labour market, many changed their beliefs, becoming more supportive of pro-immigration policies.

The findings were presented by the study’s co-author Christopher Roth at a seminar hosted by the Economic and Social Research Institute (ESRI) in Dublin on Thursday.

While research on the impact of immigration on voting outcomes cannot identify the underlying motivations of the voters, “our findings suggest that labour market concerns may be an important mechanism at play,” Mr Roth said.

Immigration has been one of the most hotly contested issues and arguments over whether it is good or bad for the economy were central to the Brexit referendum and the election of US president Donald Trump.

In the US, 67 per cent of Republican-supporting voters say increased immigration has hurt American workers, compared with 30 per cent of Democrats.

Mr Roth said his research centred on a large, representative sample (more than 3,000) of the US population and demonstrated that labour market concerns are a “quantitatively important driver of attitudes towards immigration”.

He explained that they presented respondents with the findings of a landmark study, which showed that the influx of Cuban migrants into Miami in 1980, when former Cuban leader Fidel Castro briefly lifted the country’s ban on emigration – known as the Mariel boatlift – had little impact on wages and unemployment.

In response, a significant number of people from a different social strata changed their view on immigration, shifting from negative to positive. The Mariel boatlift event saw 125,000 low-skilled Cuban workers arrive in Miami within the space of a few weeks, increasing the workforce there by 20 per cent.

The original study of the economic impact, still the most cited of US immigration studies, found the influx of workers made no difference to wages or employment trends. However, a more recent study has disputed this finding, suggesting there was a decrease in wages for a certain cohort of indigenous workers.

Mr Roth said his study also indicated that people might change to having a more negative view of immigration if presented with different research.