Johnson backed into a corner despite rare Commons win

Business Week: also in the news were job losses; plant closures; and housebuilding 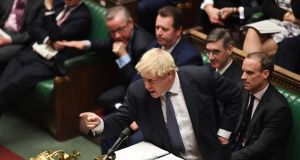 UK prime minister Boris Johnson urging MPs to back his Brexit deal in the House of Commons this week.

It was a case of eighth time lucky for UK prime minister Boris Johnson as he finally won a vote in the House of Commons this week. And it was not an insignificant victory, giving some indication, as it did, that a crash-out Brexit can be averted.

MPs approved the withdrawal agreement Bill’s second reading by a majority of 30. While this was just one stage of the process required to pass the Bill, it was nonetheless the first time the House of Commons has backed any Brexit deal.

It was a welcome and much needed win for the prime minister who has been under siege since taking office three months ago. But it was back to business as usual almost immediately as MPs voted down his timetable that attempted to ram the deal through parliament.

Those votes stemmed from a setback for Johnson days earlier when speaker John Bercow pulled the “meaningful vote” on the deal after MPs passed the Letwin amendment, withholding approval until the legislation to implement the deal is in place.

Letwin, one of the MPs to have the Tory whip withdrawn after rebelling on Brexit, said the amendment was an “insurance policy” intended to ensure the UK cannot “crash out” of the EU on Thursday in the event the deal was backed by MPs but the legislation fell.

Following Bercow’s ruling, Johnson was forced under the Benn Act to write to the European Union seeking an extension, having earlier declared that he would rather “die in a ditch” than do so.

Johnson sent Donald Tusk an unsigned photocopy of a request for an extension from MPs, stressing it was “parliament’s letter” and not his, accompanied by a second letter stating he personally is not asking for an extension and that he believes it is a mistake.

But all in all, Johnson found himself exactly where he didn’t want to be. Parliamentary approval for the deal seemed possible, but MPs were not willing to rubberstamp it before the legislation is passed and were neither willing to rush the process.

That left EU leaders to consider a three-month extension and, while an impatient and frustrated French president Emmanuel Macron is reticent unless the UK commits to an election or a second referendum, an extension is now the most likely outcome.

Johnson, for his part, wants a general election on December 12th. The House of Commons will vote on the matter on Monday, but Johnson is unlikely to achieve the two-thirds supermajority he needs to get one.

Meanwhile, London confirmed that companies in Northern Ireland that want to sell products into Britain will have to complete export forms after Brexit if the deal on the table is eventually ratified.

It was a terrible week on the employment front as plans to cut more than 1,000 jobs were announced in different parts of the State.

Trade union and business leaders reacted with dismay to the news that pharmaceutical giant Novartis is to lay off up to 320 of its 550 strong workforce at its Ringaskiddy campus in Co Cork from the middle of next year as part of a global restructuring.

Just up the road, US multinational manufacturer Molex announced the closure of its Irish subsidiary in Shannon with the loss of up to 500 jobs in a major blow to the region. The closure will take place in a series of phases, starting early next year.

Meanwhile, in Dublin, the honeymoon period for Mediahuis, the new owners of Independent News and Media, is well and truly over after it decided to shut its printing plant in Citywest with the loss of 84 jobs.

Elsewhere, Permanent TSB is expected to close about a fifth of its 77-strong branch network. The bank’s chief executive, Jeremy Masding, announced plans to step down next year but he is expected to oversee the process beforehand.

Industry sources estimate that 10-15 per cent of the bank’s workforce is up for the chop – equating to between 240 and 360 positions. PTSB is also understood to be considering a sale of its headquarters on St Stephen’s Green.

In the North, the Bamford Bus Company confirmed its deal to save Wrightbus in Ballymena, Co Antrim, but it will initially employ only 60 people while it determines the “size and composition of the workforce required”. Wrights previously employed 1,200 people.

Concerns were also raised this week for the State’s housing targets as Goodbody pointed to a slowdown in the market as the reason why its prediction of 24,000 builds next year is unlikely to materialise.

“With unsold stock rising due to lagging private new home sales, the risks remain tilted to the downside to our completions forecast of 24,000 for 2020,” it said in its latest house-building tracker.

The report indicated housing completions were up 34 per cent in the third quarter of 2019, bringing the total so far this year to 15,400, but the full-year 2019 tally may only modestly exceed its forecast of 21,000 units.

However, several agencies, including the Economic and Social Research Institute, estimate that annual housing demand in the Irish market is 30,000-35,000.

Staying with property, US player Heitman became the Republic’s newest institutional landlord when it paid €52 million to private individuals for 27 buildings with a total of 214 apartments in various parts of the capital.

Finally, it emerged that a Kerry businessman was overcharged more than €664,000 in interest by KBC Bank Ireland after it wrongly withdrew his tracker mortgage rate. His is one of the biggest cases of its kind in the tracker mortgage scandal.