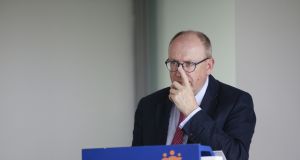 Jeremy Masding: he was initially tasked in 2012 with convincing the government and the European Commission that PTSB had a future after its €4bn taxpayer bailout. Photograph Nick Bradshaw

Permanent TSB chief executive Jeremy Masding, who announced on Thursday that he plans to step down next year, will deliver a restructuring plan beforehand involving the expected closure of about a fifth of its 77-strong branch network and elimination of hundreds of jobs.

Industry sources estimate that 10-15 per cent of the bank’s workforce – equating to between 240 and 360 positions – could be cut under the biggest overhaul since Mr Masding unveiled an initial cost-cutting initiative in 2012, months after joining the bank.

Permanent TSB (PTSB) is also understood to be considering a sale of its headquarters at 56-59 St Stephen’s Green. Decisions on the plan are unlikely to be taken until early next year, according to sources.

Mr Masding was initially tasked in 2012 with convincing the government and the European Commission that PTSB, which would lose €1 billion that year, had a future after its €4 billion taxpayer bailout.

He subsequently led the bank back to the main Dublin stock market in 2015 as it was required to raise equity after failing European stress tests. He completed the sale of its €6.5 billion UK loan book in 2016 after the Brexit vote, and offloaded €3.4 billion of non-performing loans (NPLs) last year without blowing a hole in the group’s balance sheet.

The bank agreed last month to sell a further €506 million of problem mortgages to Start Mortgages, part of US private equity firm Lone Star. It will bring its NPLs ratio, which stood at 28 per cent in 2017, down to 7 per cent.

“Jeremy and his team oversaw a very complex and challenging turnaround which has restored Permanent TSB to a position of significance in the Irish banking market,” said chairman Robert Elliott. “Jeremy leaves the bank in an immeasurably stronger position than when he took up the role.”

The 75 per cent State-owned bank said that its board has commenced the process to find a new chief executive and that the effective date of his departure has yet to be determined.

Still, PTSB’s planned restructuring comes at a time when it is expected by analysts to deliver a 2 per cent return on equity (RoE) for this year, making it the least profitable of the surviving Irish banks. Equity and debt investors typically expect banks to post RoE of at least 10 per cent to demonstrate financial resilience.

European banks have announced more than 50,000 of job cuts so far this year as they battle against lower-for-longer European Central Bank (ECB) rates, economic weakness, rising regulatory costs, and as more customers of their do their banking online. The sector has spent tens of billions of euro on information technology (IT) in recent years to push customers towards digital channels.

In Ireland, where concerns over Brexit are weighing on bank lending to small businesses and the housing sector, AIB and Ulster Bank outlined in recent weeks how they are planning a fresh round of job cuts to rein in costs. Bank of Ireland signalled in June last year that it will reduce its workforce to help achieve financial targets set for 2021.

“Cost management remains a high priority for the bank and any future cost reduction is a further evolution of what we have already undertaken in recent years – i.e. voluntary severance schemes; recruitment freeze for non-critical roles; and, a reduction in arrears management staff due to lower non-performing loans,” said a PTSB spokeswoman, who declined to comment on the plans.

The spokeswoman insisted that there were “no plans to close branches”.