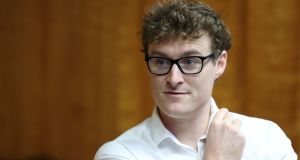 Paddy Cosgrave, the founder of Web Summit, which kicks off in Lisbon in 10 days, has suggested that a State “censoring agency” for social media could help to combat problematic speech online.

Mr Cosgrave was speaking at Web Summit’s Dublin headquarters ahead of the Lisbon event, which will attract 70,000 visitors to hear from about 1,200 speakers, including Margrethe Vestager, the EU’s competition commissioner, and Guo Ping, chairman of embattled Chinese handset maker Huawei.

Mr Cosgrave was responding to a query about whether he supported the aims of US presidential hopeful, Elizabeth Warren, who has vowed to “break up Big Tech” should she succeed in evicting Donald Trump from the White House.

He suggested that the impact on society of huge web companies such as Facebook, or companies with a major influence such as Twitter, is akin to the societal change wrought by the invention of cars at the end of the 19th century.

“When cars came along they were a transformational technology but they also maimed an insane amount of people,” he said.

“Using the framework of cars, what is the seatbelt for being on Twitter? With cars we trained police to regulate traffic. If we can figure out what is bad behaviour on Twitter maybe we could get pulled over by a social media cop.”

He said social media had caused many “second order problems” for children that may require legislation, and highlighted that other media, such as traditional films, had rules to limit what certain age groups can watch.

“There are censors for films. Maybe there should be some sort of independent censoring agency – a State agency – for social media that could retrospectively have the power to take down certain tweets, or not display them in certain countries.”

On whether to break up rather than regulate “Big Tech”– including Google, Facebook and Amazon – he said there were “good arguments” for doing so to stimulate innovation. He argued that major tech companies don’t spend a large proportion of their huge profits on innovation.

Referring to past testimony provided by Facebook founder Mark Zuckerberg in front of political committees in the US and elsewhere, he said: “I don’t think anyone watched it and thought this guy has cogent arguments to defend the current position.”

On Web Summit, he said the company was still looking to expand and may consider further developing a conference for the car industry. Web Summit also recently opened a new software engineering office in Porto, employing about 15 people, bringing the total in related disciplines to about 50 across the group.

He said the company does not need further capital to expand, either for its core conference business or its software-building arm: “We fund all that ourselves.”

Next month’s event will be the ninth Web Summit and its fourth in Lisbon, since it moved from the RDS in Dublin.

Mr Cosgrave highlighted the emergence of a theme of whistleblowers at this year’s event, with speakers including former US intelligence official, Edward Snowden, who blew the whistle on mass State surveillance through technology, and John Tye, founder of Whistleblower Aid.

Other speakers include Tony Blair and Brazilian former footballer Ronaldo.

1 Who are Ireland’s 17 billionaires?
2 Why has the pension age question suddenly become an election issue?
3 Ireland has fifth-largest number of billionaires per capita in the world, says Oxfam
4 Restoring pension age to 65 would cost €620m a year, claims FF
5 Court approves debt for equity swap insolvency arrangement
Real news has value SUBSCRIBE