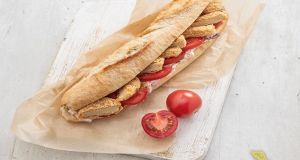 Insomnia’s Vegan Chick*n Fillet Roll. ‘The way they’ve stylised it is exactly the same way as I have stylised mine,’ Sam Pearson of the Vegan Sandwich Company said

Coffee chain Insomnia has rejected claims it copied an artisan food producer’s “vegan chicken fillet roll” but has agreed to rename its product as an act of “goodwill”.

The company recently launched a vegan version of the ever popular chicken roll as part of an expanded range of vegan offerings.

But Sam Pearson, the owner of the Dublin-based Vegan Sandwich Company, took to Twitter this week, claiming Insomnia’s sandwich bore a striking resemblance to his own version and was being sold under the same name “vegan chick*n fillet roll” with an asterisk.

“The way they’ve stylised it is exactly the same way as I have stylised mine,” he said, noting the asterisk was in the same place.

“Obviously being a small producer you’re not going to be happy if a company the size of Insomnia produces a similar product to yours, but what they’ve done is not right,” he said.

Insomnia said it was unaware of the Vegan Sandwich Company’s product and denies copying it in any way.

“We didn’t steal anybody’s recipe, and I don’t think he [Pearson] can claim to have originated a vegan chicken roll,” spokeswoman Liz McGonagle said, noting the sandwich was part of a line of vegan takes on popular classics that Insomnia had launched in recent weeks.

“ He wasn’t the first person to do one and he won’t be the last,” she said. “We’ve spoken to Sam, he’s coming into us on Friday. I think his biggest concern was the use of the asterisk,” she said.

“We didn’t set out to step on anyone’s toes,” she said, noting Insomnia has been a strong supporter of smaller food producers.

Nonetheless, the company has agreed to change its packaging as a act of goodwill. It also considering a possible collaboration with Mr Pearson.

Insomnia initially responded to Mr Pearson’s claim on Twitter, saying: “We know there will be many more variations of the same to follow and confident there is a market for us all.”

There has been a jump in the number of fast food and quick-serve restaurants offering plant-based meat alternatives, including products from companies such as Beyond Meat and Impossible Taco.

1 Lockdown exit: How can Irish economy reopen without big health risks?
2 Property market has not felt full impact of Covid-19, warns Sherry FitzGerald
3 Government announces €1bn in supports for small businesses
4 I want to change my will quickly in case I fall ill. Do I need a lawyer?
5 Business Post cuts pay for staff by up to 15%
6 German fund closes €93m Harold’s Cross build-to-rent deal
7 Facing economic meltdown ... and nothing wrong with our economy
8 Q&A: Where do we stand on mortgage holidays and payment breaks?
9 Tesco says coronavirus costs could reach €1bn
10 Digital health platform SilverCloud Health raises €14.7m
Real news has value SUBSCRIBE