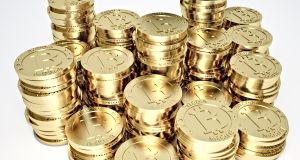 Blockchain technology has had its share of sceptics, principally because of its association with bitcoin, above, a cryptocurrency that has, in the past, been used for the sale of illicit drugs and arms, among other things.

Blockchain technology, the digital ledger underpinning cryptocurrencies such as bitcoin and ethereum, is moving one step closer to legitimisation with the launch of the Blockchain Association of Ireland, a non-profit advocacy group for the technology in Ireland.

Its aim is to establish Ireland as a global hub for innovation in a technology that has had more than its fair share of sceptics, principally because of its association with bitcoin, a cryptocurrency that has, in the past, been used as a digital currency for the sale of illicit drugs, arms and other questionable transactions.

After just a few short years in existence, bitcoin has become one of several hundred cryptocurrencies created for various digital markets, leading many with a stake in the traditional fiat currency model – banks, governments, etc – to label the technology as something to be feared.

However, more and more people in areas such as business, finance and healthcare, are beginning to realise the potential offered by the blockchain – the secure, digital ledger where all cryptocurrency-based transactions are recorded and stored – as a potentially new and reliable data storage facility for any sensitive information – be it private health records, land registry or financial information. Now many of its once vocal critics have had a change of heart.

The Blockchain Association of Ireland aims to assist any groups in Ireland using the burgeoning technology in areas such as digital currency, smart contracts, fintech, healthcare, agribusiness, retail, wider industry as well as non-commercial applications. The aim is to put Ireland in a strong position if and when the technology becomes the global force many of its advocates claim it will be.

The new association aims to do this by engaging with regulators, policymakers, educators, for- and not-for- profit organisations, and technology entrepreneurs through direct communication to guide the public dialogue around blockchain technology.

“For some time now there has been a number of informal networks and workgroups looking at the topic in Ireland,”says Reuben Godfrey, co-director of the Blockchain Association of Ireland.

“The association primarily bridges the gap between informal and formal networks to open the public dialogue and advance Ireland as an innovative hub for technology and the multiple societal and commercial applications of blockchain. We are non-profit and member-led and will facilitate workgroups, seminars, and trainings with the aim of producing practicable white papers in all the key verticals [specific markets]. We aim to bring the Irish blockchain community together at our annual summit, Deepgreen 2017, in April of next year.”

While blockchain technology has been sufficiently distanced from the controversy surrounding the principle currency it supports, bitcoin, there are still many out there who look upon the digital ledger with scepticism.

“Bitcoin should always be part of the conversation but the industry has gone through something of a gentrification period in the past year and many corporations now prefer the term ‘DLT’ – Distributed Ledger Technology – to describe it,” says Godfrey. “There are other cryptocurrencies too, though, and we wish to be open minded and not focus exclusively on bitcoin. Along with fintech, insurtech, [internet of things], education and retail, cryptocurrency will be just one of our initial areas of interest.”

The number of blockchain enthusiasts emerging increases almost daily. “There are many governments that have shown interest in a number of different applications, including Estonia, Dubai and the UK,” says Godfrey. “The areas of health and land registry have very obvious potential. As with any technological advance though, adoption is dependent on communication between differing institutions and the political desire to enact changes.”

The new association, which will be officially launched on December 14th, at the Bank of Ireland Innovation Workbench in south Dublin, aims to connect grassroot talent with strategic intent and make Ireland an innovation hub.

“Bank of Ireland and Deloitte have been working together for some time and have demonstrated how financial institutions can combine the technology with their existing systems to provide next-generation client experience and regulatory oversight at a lower cost,” says Godfrey.

“We have a thriving tech industry with unparalleled international reach and very tech-savvy graduates and this new industry is still waiting for the kind of revolutionary blockchain app that could really move this tech into the mainstream. There’s every reason to expect that technology could come out of Ireland.”