After globalisation, will automation mean even greater unrest?

A whole range of jobs will be obsoleted by technology, with far-reaching risks 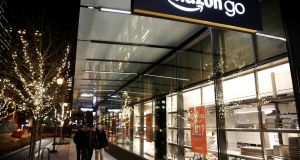 “No lines. No checkout (No, seriously.)”: The newly opened Amazon Go, a brick-and-mortar grocery store without lines or checkout counters in Seattle, Washington. Photograph: Reuters/Jason Redmond

From Brexit to Trump, you can’t miss the warning signs – a dangerous breed of populism is rising all around us, depicted as a backlash against decades of globalisation that has left too many people behind.

Bear in mind that neither the UK nor the US are in economic dire straits, and both have relatively low unemployment, and yet we still see social and political turbulence arising from globalisation and economic inequality. Now, as global labour undergoes further upheaval, we had better prepare for an even bigger wave of unrest, perhaps an even more virulent form of populism.

For a small foretaste of what is about to unfold, we should look to an unlikely venue: Irish libraries.

At the end of November, it was announced that Minister for Local Government Simon Coveney would roll out a so-called “staffless” library scheme to 23 libraries in January, after a trial that began in 2014. The initiative would extend library opening hours from 8am-10pm, seven days a week, with CCTV cameras, card-swipe access and automated book-lending terminals assuming many of the responsibilities of flesh-and-blood librarians.

Needless to say, librarians strenuously oppose the scheme, arguing that this change is the thin end of the wedge, with staffless periods inevitably extended to the rest of the day as jobs are cut.

It is here we glimpse the fate that will befall so many industries.

By coincidence, on the same day that Coveney’s announcement was covered, The Irish Times reported on an innovative new programme in west Clare. Faced with a lack of doctors in the area, GP collective ShannonDoc is testing conducting appointments via video link with doctors in Dublin. “The service uses technology that allows the GP to measure patients’ vital signs, such as heart rate and blood pressure,” the report said.

Relatively soon, diagnostic machines will progress in sophistication to the stage that patients will receive assessments and automatic prescriptions without ever seeing a GP, via video or otherwise. At which time you can be sure doctors will be echoing the arguments librarians are making today.

At this point, anyone who assumes the threat of automation to the world of work is the preserve of far-fetched science fiction just isn’t reading the news.

Earlier this week, Amazon, having already disrupted the retail industry and threatened to make delivery couriers redundant with the use of drones, opened a physical store in Seattle with no checkout, at all: “Amazon Go is a new kind of store with no checkout required . . . Simply use the Amazon Go app to enter the store, take the products you want, and go. No lines, no checkout.”

And no shop assistants, evidently. This venture takes automated self-service checkout machines to their logical conclusion.

It is important to contemplate how those squawking, oddly combative bar-code scanning machines in supermarkets have served as a brutally efficient introduction to mass automation. While they bamboozled us with talk of bagging areas, they were actually inuring us to the sudden obsolescence of huge numbers of jobs.

After the supermarket went self-service, it didn’t seem quite so odd when your local bank cut the number of tellers and introduced more advanced, full-service ATMs.

These are the service jobs that were supposedly immune to globalisation, shrinking away in the face of increasingly sophisticated machines.

And the machines are on the move. Everyone is keeping an anxious eye on driving and trucking – an area that provides decent wages to huge numbers of people without a college education. In October, a truck delivered 45,000 cans of Budweiser to a warehouse in Colorado Springs after travelling more than 120 miles across the state. The truck had no driver at the wheel.

With some 1.5 million people employed in US trucking and many millions more in ancillary industries, that Budweiser delivery was the canary in the coal mine, keeling over.

Today, to describe someone as a Luddite is an insult, a derisive sneer at their technophobia. The Luddites, of course, were rendered redundant by the Industrial Revolution and the arrival of looms and large textile machines in the early 19th century. In response, they fomented industrial unrest and smashed the looms.

We tend to think of that burst of violence as a hopelessly naive effort to halt the inexorable march of progress. But perhaps it’s more accurate to consider the Luddites as 19th-century equivalents of the modern western working class, left behind by globalisation and equally eager to smash the system that strips them of a job, and of purpose.

In some sense, automation will represent the ultimate triumph of capital over labour – the profits will increasingly go to the robot makers and AI developers of Silicon Valley and the technology industry, while the share of the pie going to workers, whether blue or white collar, working class or professional, will shrink and shrink.

If 2016 has proven anything, it is the fearsome, unpredictable power of people who feel neglected in an increasingly unequal economy. What sort of social unrest will we see when all of us risk becoming Luddites?