The US administration has presumably been getting its scientific and medical advice from Dr Seuss, the TV show Scrubs and the back of cereal boxes 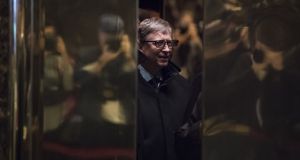 Bill Gates at Trump Tower in New York. It was during a meeting between Gates and Trump in March of 2018 that the billionaire claims he changed the president’s opinion on vaccinations. Photograph: Getty Images

How did Bill Gates manage to sway Donald Trump towards a pro-vaccination stance? By being there.

There is a site where people share their favourite nicknames for the current president of the United States Donald Trump. Never heard of him? How about Agent Orange, Fauxtus, Little Hands Trump, Spanky or my personal favourite Impotus. (Others shall be sprinkled throughout this piece).

“Red Don” is a lot of things, but one thing he is not is a “go it alone” type of president. By all accounts his decision-making process is impulsive but heavily influenced by the impulses/agendas of others. One of which, surprisingly, is Microsoft founder Bill Gates.

Take an exchange in 2018 between “Agent Orange” and the billionaire philanthropist who in partnership with his wife Melinda, have become outspoken advocates for vaccinations, especially in the developing world. (The Bill and Melinda Gates Foundation recently donated $12 million to help biomedical research into the development of a universal flu vaccine.) It was during this meeting between Gates and Trump in March of 2018 that Gates claims he changed the president’s opinion on vaccinations.

Trump has said many things on record questioning the wisdom of vaccinations. He tweeted: “Healthy young child goes to doctor, gets pumped with massive shot of many vaccines, doesn’t feel good and changes - AUTISM. Many such cases!”

It is often said that politicians suffer from acute verbal diarrhoea. But that pejorative generalisation of the body politic is, at the very least, based upon a diagnosis we can relate to. In the case of the US president, his words, let alone his entire sentences, tend to mean even less than “iffendoofer”, “na-nupp” or “fizza-ma-wizza-ma-dill”, just three gems spouted by the fictional character Dr Seuss.

Unfortunately his words tend to distract from his actions. For the third year running the National Institutes of Health (NIH), charged with the development of a universal flu vaccine, has had its federal spending budget cut for 2020. Bad news of course. However, the White House budget proposal highlights a number of initiatives at NIH that align with presidential priorities: one of which includes the development of a universal flu vaccine.

So what did Gates say in that meeting. Clearly the archetypal tech nerd understood the importance of fuelling the “Potus” desire to leave behind a positive presidential legacy. Gates recalls advising him to associate himself with “American innovation”.

“Wouldn’t you love to have the universal flu vaccine be something that really got kicked off and energised by you?”

This idea appealed to Trump, who, according to Gates, claimed to be “super interested”. So much so he had the FDA commissioner, Scott Gottlieb, on speakerphone moments later to ask him what he thought.

At the expense of giving the leader of the free world a break, “TicTac Trump” probably isn’t even aware of some of the crazies hanging around the Oval Office these days, and may not have strong feelings towards the anti-vaccination lobby at all. After all his kids have all been vaccinated.

But it is clear he doesn’t have too many level-headed advisers around him either. For example, why call the head of the FDA and not simply ask the White House chief scientific adviser?

Oh yes that’s right, the last director of White House Office of Science and Technology Policy, John Holdren, quit at the end of the Obama administration. Since then the current US administration has presumably been getting its scientific and medical advice from Dr Seuss, reruns of the TV show Scrubs, and the back of cereal boxes.

But even Trump knows he can’t rely on Cheerios forever. In the same meeting back in 2018, “Red Don” offered Gates the position of White House chief scientific adviser. Chill Bill politely declined.

Now that measles is back in the US and spreading like, well like “a preventable disease for which there is a tried and tested vaccine but that many people refuse to believe is safe”, Trump swiftly called on parents to get their kids vaccinated.

The number of reported measles cases in the United States as of right now is the highest it has been since the disease was officially declared eradicated nationally back in 2000.

So maybe all it takes is for a few more non-threatening Bill Gates types to enter his sphere of influence and “advise” him in the direction the rest of the world is going.

I’ll end with a recent tweet from Prof Barry O’Sullivan, founding director of the Insight Centre for Data Analytics at UCC. “Apropos vaccination: try to find a kennel that will take an unvaccinated dog for a couple of days. Not a hope.”

That’s just the kind of argument “Spanky” might just get behind.