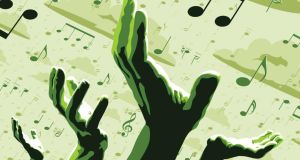 Spotify and other music-streaming services online have helped the industry not just to get by, but to grow.

When More Life, the album by the Canadian rapper Drake, was released last month, it was streamed 385 million times in its first week in the US. The number was extraordinary, but the medium was not: audio streaming has taken over from sales of CDs and downloads, and even piracy.

US streaming revenues rose to $3.9 billion last year – 51 per cent of a total of $7.7 billion. The latter is only half the industry’s sales in 1999, before the outbreak of digital piracy, but growth has returned. Universal Music, the biggest music label, struck a new licensing deal this week with Spotify, the streaming service, easing the way for Spotify’s initial public offering.

The pirates’ strongholds are being retaken. Pirate Bay, a peer-to-peer site, went live in Sweden in 2003, with Gottfrid Svartholm, its co-founder, declaring: “Sweden is a country in northern Europe. US law does not apply here.” He was later jailed and Sweden now has one of the world’s highest paid-subscription rates to services including Apple Music.

Music was among the first industries to be digitally disrupted and music labels were badly hurt. So their recovery in developed markets (piracy remains widespread elsewhere) has useful lessons for others.

First, as Bob Dylan would advise, don’t throw it all away. The labels made mistakes – suing individuals for illegal downloading and making themselves look like bullies was one of the worst. But they kept their faith that recorded music was valuable and worth paying for, unlike publishers that unwisely switched to giving away news for free and relying on advertising.

That faith is now paying off. Paid subscriptions, which jumped from $1.2 billion in $2.5 billion in the US last year, are becoming the industry’s main source of income as digital downloads and physical sales decline (apart from the vinyl resurgence). Some 50 million Spotify users now pay to have unfettered mobile access to its 30 million tracks rather than relying on its basic ad-funded service.

They also stuck with what they were good at – the discipline of finding and developing artists, and of marketing. They still spend 27 per cent of revenues on such functions, according to the IFPI industry group. Although they have evolved by using channels such as YouTube to scout talent, they remain largely in the same business.

Second, in the wise words of the singer Meghan Trainor, it’s all about that bass. Size helps and it becomes vital amid digital upheaval, when power shifts from content owners to distributors. The pattern has been repeated in music, book publishing, and television and film, with labels, imprints and studios having to contend with powerful entrants such as Amazon and Netflix.

In response, music labels have consolidated from what used to be the big six to the big three of Universal, Warner Music and Sony Music, which together hold about 75 per cent of the market. That has given each of them greater clout to negotiate with Spotify and other distributors, just as book publishers have consolidated to a “big five” to match Amazon’s power.

Size has an additional advantage in the digital world because streaming services need both hits and catalogues – listeners paying $9.99 a month expect Adele’s 19 and 21 albums as well as 25. This boosts the labels’ bargaining power and is good for profits: their digital margins are double those on physical sales, according to Goldman Sachs.

Third, like the Beatles, they got by with a little help from their friends. The labels initially tried to go into the digital distribution and retail business by launching services such as Pressplay, Universal and Sony’s joint response to the rise of file-sharing on Napster. They failed because they lacked both the skills and the determination to revolutionise their business model.

This was not wholly their fault. It is hard for competitors in one activity suddenly to start co-operating in another, even leaving aside the antitrust hurdles. It is especially difficult if the new venture has to bargain with its owners, as a music distributor negotiates with rights holders. A new entrant such as Spotify does not suffer from the same legacy issues and conflicts.

That made it easier to innovate, which unlocked the music industry’s difficulties. Streaming services are not just collections of music, like pirated tracks on hard drives: they are more fluid and flexible, offering new ways to discover artists through friends. Music labels were unable to invent such products themselves – they could only emerge from collaboration.

Spotify and YouTube are frenemies more than friends. Labels are wary of ad-funded streaming because royalties are lower – the new Universal deal permits its artists to hold back new albums for two weeks from Spotify’s basic service. Relations are especially strained with YouTube, which the labels accuse, with some merit, of taking advantage of loose copyright laws to offer lower royalties on video streams.

But streaming helped the industry not just to get by, but to grow. By sticking to what it did best, getting bigger to bargain harder, and finding new partners, it gained more life. – (Copyright The Financial Times Limited 2017)