Tech innovation is often driven by our baser instincts 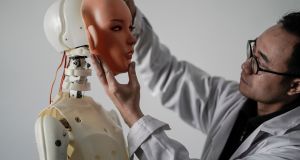 An engineer works on robot at a lab of a doll factory of EXDOLL. With China facing a massive gender gap and a greying population, a company wants to hook up lonely men and retirees with “smart” sex dolls that can talk, play music and turn on dishwashers.

The Danish public sector is one of the world’s most digitised – and therefore, efficient – bureaucratic systems in the developed world. Approximately 90 per cent of all Danes over the age of 16 use a government-issued digital ID to access everything from personal hospital records, death certificates and tax returns with just a couple of clicks.

In what must be a first for Scandinavia, however, Danish authorities have admitted digitisation of some of their public services was probably a mistake.

By filling out a short online form and paying a nominal fee, one can be granted official divorce papers in Denmark in less than a week. With one of the highest divorce rates in Europe, Danish authorities have decided this might have been a little short sighted on their part.

New rules coming into effect this year will require couples with children to remain married for a further three months after filing for divorce online so that they can reflect on the decision as well as attend free state-sponsored counselling before any decision is made final.

Easy access to firearms is what many consider to be the primary contributing factor to the number of mass shootings in the United States. The Danes obviously feel the same way about divorce. After one shotgun wedding too many being put to an end simply by the click of a mouse, government officials realised tech won’t necessarily provide solutions to all life’s foibles.

It is helping reduce sexually transmitted diseases though. The world’s largest gay dating app, Grindr, is finally helping address the unicorn in the room for many gay men: the return of increasing numbers of recorded cases of HIV infection.

According to some sources, over 107,000 gay and bisexual men in the United States have HIV, but don’t know it. Grindr has changed its software programmes to provide users with reminders every three to six months to get tested for STDs, an initiative which has already proven effective, primarily because the gay dating app is perceived as a neutral, non-judgmental forum when compared to say, specific health-oriented apps that can make users feel shamed for missing a test.

Promising innovations rarely begin as philanthropic tools to improve people’s lives. No, whenever humans invent a new technology, we inevitably try to exploit its potential in one of two ways: as a unique tool to kill each other with, or to have sex with.

Ever heard of teledildonics? No it’s not an adult spin off of the Teletubbies. But those who have ever endured a long-distance relationship might be familiar. Sex tech industry companies like Kiiroo and Vibease sell internet-connected sex toys, to make that distance between lovers a little more manageable.

Using what’s known as haptic touch technology, the devices can record sexual motions and transmit the sensations between lovers who may be oceans apart.

Then there’s the race to create fully functioning, life-like sex robots, a burgeoning industry almost as heated as competition in the driverless car sector. Some prototypes already exist but fail to meet all human requirements for a truly authentic-feeling sexual experience. Did I say human? I meant straight, white male human experience because sex tech, like every other sector, is for the most part geared towards one group and one group only.

However, given those innovating in a space as niche as sex tech are not likely to be all that concerned by taboos, stigma or what their neighbours think of them generally, it has become a fertile ground for innovations catering for the needs of more marginalised members in society – such as the transgender community or people living with physical disabilities.

Virtial Reality, for example, has helped some people inhabit a physical form they feel is truer to them, or which offers fully functioning parts no longer available on account of an accident.

Coders believe everything can be hacked, including the brain. Therefore, if one understands the mechanics of the brain, it is possible to use one sense to support another which might be lacking.

Senses that have been weakened on account of a physical disability can be replaced by the strength of another.

Tech is proving once more its power to change our social lives, and how innovation is often driven by our baser instincts.