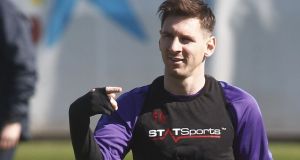 News that a small Newry-headquartered firm had scored a massive deal with the governing body for soccer in the US may have astounded many. However, it also serves as evidence of just how strong Irish companies are in the sports technology space.

Ireland might not seem like an obvious home for such tech, but in recent years start-ups from here have gone out and made a name for themselves on the world stage, providing solutions that keep professionals match fit and focused on their game.

“There’s a growing number of sports tech companies in Ireland like ourselves, Orreco and Kitman Labs. We may be offering different solutions, but it feels like there is a great hub forming with a good energy around us all,” is how Sean O’Connor, co-founder of Statsports, describes it.

Indeed, according to figures collated by TechIreland, there are 43 sports tech companies locally, who between them employ more than 400. More than half of these start-ups have already raised finance totalling a combined €22 million.

Statsports itself last week announced it had agreed a five-year partnership worth £1 billion (€1.14bn) with the US Soccer Federation which will see millions of American players using its monitoring devices to aid performance on the pitch.

The partnership is expected to result in the world’s largest player data-monitoring programme, and it is believed to be the biggest contract ever to be signed in the elite sports wearables market.

Statsports, which was founded by O’Connor and Alan Clarke in 2007, is now expecting to significantly increase staff numbers, and may seek outside funding as it looks to accelerate growth on the back of the deal.

In addition to praising what is a burgeoning sports tech sector in Ireland, O’Connor says that being Irish has actually been a benefit to the company when it has gone looking to get into clubs overseas. This he says is because as outsiders we’re not enmeshed in the often bitter rivalry that exists in many cities and countries.

“We’re seen as being neutral, and so we’re not a threat to anyone,” he says. “We might have more difficulty getting teams in Premier League teams in London if we were based in the north of England or vice versa.”

The fact that Ireland is relatively small in terms of the number of professional teams playing here means that most indigenous sports tech companies are relatively unknown at home.

“Up to now not many people are possibly aware of us even though we’re working with the IRFU and all four rugby provinces, and have close links to League of Ireland, GAA, the FAI and Irish FA and so on,” says O’Connor.

Statsports’ Apex device is worn in a vest and positioned between the shoulder blades during training and matches. It captures thousands of datapoints per second in real time on everything from speed and distance run, to whether an athlete is favouring their left or right side so much that their running efficiency goes out of sync. The information can be streamed directly to a phone, tablet or smartwatch, making it easy for coaches to incorporate it into training schedules.

Established by O’Connor, who has a background in sports science, and Clarke, a former musician and engineer, the company has been self-financed to date. While it may not exactly be household names in Ireland, Statsports has a pretty impressive client list.

As O’Connor says, there may be differences between what Statsports, Orreco and Kitman Labs provide to clients, but all have come up with solutions that are seen as critical in giving players and clubs an edge.

“When you are in the elite sports space the athletes and players you have are of huge value but also a huge cost, so being able to monitor them and look at the finer details is essential. Anything that can ensure clubs keep players match fit for longer and working to their optimum is always going to sell well,” says O’Connor.

That certainly seems to be the case for Statsports at least, which has grown year-on-year since it was founded, and is now expecting to double turnover in 2018.

Yet it’s not solely about keeping elite sports professionals sharp. Statsports’ deal with the US Soccer Federation is also about helping to uncover the next generation of stars.

“The federation is going to be able to use our technology to look at standards across the four million registered players in the US. They’ll soon be able to see if some kid in Colorado playing for his local team is performing well, and whether he’s someone that might well make it all the way to the top,” says O’Connor.

THE OTHER KEY PLAYERS ON THE PITCH

Led by Brian Moore, the company, which last year raised €2 million in funding, profiles athletes based on biomarkers in the blood and then feeds this information into machine-learning programmes that can optimise training conditions. This includes identifying the best sleep patterns, the best diet, training intensity and duration.

The company, whose client list includes 35 Olympic medallists, also hired Ralph Greene, the man who initiated contracts with US basketball superstars including LeBron James and Kobe Bryant while at Nike, as its general manager for its US operation.

The company has profiled more than 2,000 athletes in Formula 1, on the PGA tour, and with players and teams in the NFL, NBA, MLB, NHL, the English Premier League and Olympic sports.

Kitman Labs is a Dublin-based sports science company working to reduce the risk of injury within professional sports organisations. Established in 2012, its backers include Ireland rugby start Jamie Heaslip.

1. There are at least 43 companies in the sports tech space in Ireland.

3. 56 per cent of Irish sports tech firms have received funding.

6. 40 per cent of these companies are already selling to international markets including the US, UK, Canada, Australia, Germany, Spain and France.

7. There is a balanced proportion of Irish sports tech companies in terms of catering to B2B and B2C segments, almost 50 per cent each.

8. Half of Irish sports tech companies were founded in the past three years.

9. Regions: 40 per cent of all sports tech companies are outside Dublin, spread across 10 counties. Of these, 60 per cent have received funding.

10. Some 5 per cent of sports tech companies have female founders.