Teaching children how to recognise dangers on farms 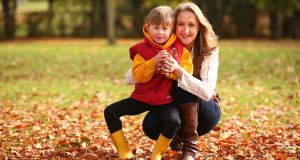 Alma Jordan and her son Eamon Delany: “Children are natural learners and love nothing more than sharing their learning outcomes with their parents.”

In 2015, Alma Jordan set up the educational platform AgriKids to teach children about farm safety in an interactive way. Jordan started the process with a series of farm safety-related books called Tales from Riverside Farm (illustrated by Donegal-based artist Martin Beckett). She has now expanded her product line-up with a range of clothing and a new gaming app.

“2014 was a record year for farm accidents and I was dissatisfied with the strategies being used to address the problem and determined to bring a new approach to how farm safety was being taught to children,” Jordan says. “I set up AgriKids with the intention of engaging and educating children and empowering them to become farm safety ambassadors.”

Jordan is no stranger to farm life, having grown up on a busy tillage and beef enterprise in Co Kildare. She is married with a four-year-old son and lives in Co Meath, where she and her husband rear thoroughbred horses and are involved in tillage and beef cattle.

“The idea for the new gaming app came about after the book series was launched,” she says. “I was keenly aware of how technically competent children are today and also how the agri-sector was becoming increasingly ‘techie’. I felt AgriKids had to move in this direction or run the risk of being redundant before it had even begun.

“In keeping with the tone of the story books,” she adds, “the gaming app is both fun and entertaining but also uses the opportunity to promote farm safety awareness to its young players. The subtlety of the messaging makes it even more effective.”

The AgriKids games highlight different dangers that exist on a farm and what steps can be taken to overcome them. For example, in Dodge the Dangers, a child can immediately see that wearing a high-visibility vest and safety helmet are positive things to do with good safety outcomes.

“AgriKids focuses on young children [ages four to 10] as I consider them key to bringing about the much needed change in behaviours and attitudes to farm safety,” Jordan says. “Children are natural learners and love nothing more than sharing their learning outcomes with their parents. Existing farm-safety education only targets farmers and this is not having enough of an impact. With AgriKids there is great potential to include the whole family in the farm safety education message. The product is ideal for parents with children attending primary school and of course the farming theme will be of most interest to rural and farming communities.”

AgriKids was set up as a solution to an Irish problem. However Jordan says there is potential wider appeal for the platform. “In the US, for example, a child dies on a farm every three days while 33 are injured on a daily basis, so there is room for improvement there,” she says. “Our closest competition would be child entertainment brands such as Tractor Ted as we both focus on education, but we are quite different in terms of our approach and our particular emphasis on safety.”

Jordan has spent about €25,000 so far to develop the AgriKids app. It was launched last November, is available for Android and iOS and is free to download. An interactive website has also been developed with free-to-download resources and Jordan has also launched a small range of functional and practical clothing and accessories with the emphasis on high visibility.

Her business will make money by selling its books and merchandise and charging for additional games and other in-app purchases. It has received funding under the Enterprise Ireland competitive start fund and Jordan has also participated in the New Frontiers programme at Athlone IT.