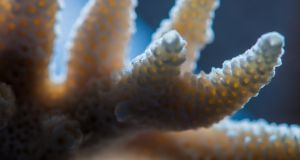 Coral: its porous structure closely resembles that of bone

The Inagh Valley near Recess in Connemara is home to stunning scenery and lots of sheep. But it is also the picturesque location of the Inagh Valley Hatchery of Ideas, a privately funded innovation hub set up by Declan Clarke and Ronnie Robins 10 years ago in a disused salmon hatchery.

Since then the venture has spun out six successful enterprises, the latest of which is Zoan BioMed. It uses sea coral to create natural scaffolds for use in orthobiologic procedures such as bone grafts and fracture repairs. The biomaterial also has potential applications in the dentistry and veterinary sectors.

“We set up Zoan BioMed to meet the growing demand for biomaterials in the bone void filler market,” says Declan Clarke, who co-founded the company with Ronnie Robins. “This market shows compound annual growth of 7.5 per cent and is of increasing importance as the global population ages.

“Coral is an ideal bone graft substitute,” he adds. “It is osteoconductive, inert, and adaptable in terms of size and shape. It is also biodegradable which allows bone ingrowth and provides structural support. Coral is similar to human cancellous bone and is one of the few xenogeneic materials that can form chemical bonds with bone in-vivo. Porosity is a really key aspect of what coral scaffolds can offer and, because they are naturally forming, they are incredibly strong, efficient and clean. It has long been recognised by clinicians that using coral shortens hospital stays and speeds the healing process.”

The potential of sea coral as a substitute for natural bone grafts was identified in the 1980s by materials scientist Prof Eugene White of Pennsylvania State University while scuba diving in the South Pacific. Getting up close and personal with the coral, he realised its porous structure closely resembled that of bone. However, although coral was subsequently proved to work on humans, there were issues around biodegradability and it was not seen as morally acceptable to plunder this precious natural resource.

“In the wild corals grow slowly as they must compete for food and light, deal with unpredictable weather events and consume enormous energy reserves to combat disease and parasites,” Clarke says. “We can deliver three coral harvests per year with optimum light, heat and premium foods ensuring fast growth and structural integrity on a manufacturing scale.”

The team behind Zoan BioMed first started their research almost five years ago and the company was officially incorporated in 2016. It now employs five people and its potential customers are well-established international medical device companies with which it hopes to partner. The company’s coral is grown in tanks from wild cultures and several types are produced to suit different uses. For example, a stronger strain is needed for use with weight bearing bones. The company’s end product looks like small particles of ground up bone.

The idea for Zoan BioMed did not come completely out of the blue. One of the longest established companies in the Inagh cluster is Coral Sea, which produces coral for the aquarium sector. This is a highly technical process and Clarke and Robins were able to tap into the skills of its key people, Simon Kilroy and James Martin, who have been working in the area of coral craft biology for over two decades. The founders also drew on the expertise of Dr Cynthia Coleman, a research fellow in Orthobiologics at NUI Galway and has partnered with Shannon-based PBC Biomed whose CEO Dermot Kelly has a proven track record in bringing new products to market and now advises others on how to do the same.

“Ronnie and I constantly scan the horizon to follow trends and identify the big issues and we tend to look to nature for the blueprints to solve them,” Clarke says. “For example, we were aware of the huge problem worldwide of honey bee colony disease. This led to the establishment of Advance Science (also an Inagh company) with scientist and beekeeper, Dara Scott, which has developed a seaweed-based product proven to reduce colony mortality.

“We’ve been also watching human health trends closely and could see what was coming down the tracks in terms of bone health issues. In the US alone surgeons perform in excess of 1 million bone grafts annually to treat some 7 million fractures at a cost of $2.5 billion. In the EU there are currently an estimated 22m women and 5.5m men aged between 50-84 years old with osteoporosis. This is due to rise and the rate of hip-related fractures will increase accordingly.

“The three main factors currently driving the world demand for biomaterials for medical use are the ageing world population with increasing incidences of diseases, such as osteoporosis and arthritis, where the efficacy of metal implants is greatly reduced and may even cause severe complications. Secondly, technological advances. The biomaterials now on the market and those in development by companies such as Zoan BioMed, have greatly enhanced qualities that aid the healing process and reduce the need for secondary surgeries. Thirdly, the growing increase in sporting and road trauma injuries.”

It has taken almost five years for the company to commercially validate the correct species of coral and ensure the right chemical makeup to mimic human cancellous bone. Such intense R&D does not come cheap. Clarke says the investment to date has been around €1 million and this has been self-funded by the Inagh group.

Zoan BioMed’s products are very much aimed at the global market and the next step is for the company to secure the CE mark for distribution throughout Europe followed by Australia. Getting FDA approval for the US market will be next followed by a move into Asia. Clarke says getting CE approval should take about two years (a relatively short time for such a process) as in biomedical terms coral is “a predicative device”. This means it has already been tried and tested for human use.

“There are a number of really advanced, highly proficient synthetics out there at the minute and also a number of coral-based products,” Clarke says. “What makes Zoan BioMed different is the intrinsic and naturally assembled porosity of our coral and our ethical and consistent supply produced to the highest operating standards. Supply from wild harvesting is simply no longer viable due to pressures on the resource and an expanding raft of international regulations.”