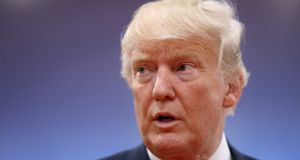 President Donald Trump has said he will pull the US out of the accord and allow more fossil fuel production. Photograph: Getty Images

We habitually put a lot of trust into our relationship with government, but you have to wonder whether that faith – that government will act in our best interests and the interests of the country – might be misplaced.

There is always plenty of light and heat when an election campaign is underway, which in Ireland almost amounts to a blood sport. Yet once the election is over we often turn our backs on the process, leaving the politicians to their own devices. We expect the opposition parties to keep Government in line and pounce on them if they don’t deliver.

Perhaps this is why we may be facing fines and penalties worth €5 billion if we fail to achieve our climate change commitments and continue to fall behind our targets agreed with the European Union. And we are already falling behind according to the Environmental Protection Office. Its analysis shows we won’t make the 2020 targets by that date unless something drastic happens and no government – particularly one held in place through opposition party sufferance – willingly wants to do drastic.

Voters don’t like drastic. Drastic costs money or leads to inconvenience. And it gives voters something to complain about on their doorsteps when visited (once every five years) by earnest politicians bearing party leaflets.

And even as we fall behind on 2020 binding agreements the EU has got 2030 commitments that will give us still more targets to miss. Missing targets is when fines can begin and they can be punitive when the stakes are high. And they don’t get bigger than climate change, something that is going to change our way of life in the future.

One recent analysis suggests that we could be racking up billions in fines, with this haemorrhaging of money occurring just at a time in the coming 10 or 20 years when a future government will need it most to increase drinking water supplies or bolster flash flood defences as a result of torrential rainfall and stronger than ever storms.

We don’t reach these environmental targets (not even those for 2020) because we the electorate don’t want to have to think about them or pay for them with fresh taxes. And we would rather have that town bypass in place rather than see money sunk into storm surge defences along our coastline.

So we rely on government to deal with these climate change issues and meet targets and save us from environmental ruin and we just let them get on with it. At least until people get interested again when during an election the climate change debate gets renewed, at least for a little while.

The environmental NGOs keep trying to raise the issue and now and again the opposition will complain about it, but climate change tends to get sidelined and as a result it gets ignored once we turn our backs on what the politicians are doing or not doing about it.

The world heard a lot of sobering comments before the Paris Agreement was signed. The agreement sits within the UN Framework Convention on Climate Change and maps out how the world hopes to come to grips with climate change and the relentless rise in greenhouse gases.

One such comment that is often repeated is the fact that ours is the last generation with the potential to pull back on climate change. If we fail to make the Paris Agreement work every generation that follows will be in retreat, trying to find better ways to cope with a rapidly warming planet rather than trying to halt the warming.

President Trump has contributed by saying he would pull the US out of the accord and allow more fossil fuel production. We here in Ireland sneer at his unwelcome and foolhardy comments, but at the same time tolerate the fact that we are unlikely to meet any of the deadlines being set to reduce greenhouse gas release. We are expected to have achieved carbon balance by 2050 but I wonder what the chances are of meeting that target.

So long as we let the TDs run the Government, we are unlikely to see decisive action on climate change. We need to engage with our TDs to make them understand we are serious about this issue and not just during the election season, and we expect them to do something about it.