Behind the tedious bureaucracy lurks a high-stakes global power drama 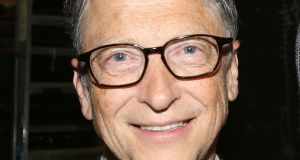 Bill Gates: for years he persisted in unveiling his tablets and smartphones, proof of his preparedness. And then Microsoft’s winter came, in the form of mobile, and all those years of preparation were for naught. Photograph: Bruce Glikas/FilmMagic

The world of regulation and anti-trust enforcement, it need hardly be pointed out, is not the most scintillating area of public interest – the interminable rules and details, the sloth-like pace of decisions and appeals, the almost abstract numbers at stake, none of it exactly sets the pulse racing.

But the fine imposed by the EU against Google last week, a whopping €2.7 billion for abusing its search engine dominance to boost its shopping comparison service and undermine other comparison sites, suggests we should sit up and take notice.

This century has seen the swift growth of a new digital economy whose contours we are still only beginning to discern, and whose realities regulators are only beginning to come to grips with. In that sense, the move against Google by European competition commissioner Margrethe Vestager is a key event in a much larger struggle to determine the course of innovation and technological progress.

As US current affairs writer Matt Yglesias put it at Vox. com, “Google’s battle with the European Union is the world’s biggest economic policy story”, and it’s clear that what seems at first blush like tedious bureaucracy is actually a high-stakes drama.

With apologies to George RR Martin, Vestager’s latest move can be seen as a Game of Thrones moment for the technology giants, one of those alarming episodes that resets the battleground and changes the stakes. Like Game of Thrones, this is a battle for supremacy between multiple powerful factions, spread across two continents, with wildly differing cultural norms and expectations.

To stretch this Game of Thrones analogy a bit further, Google’s defenders would suggest they are the Starks, with the earnest family motto of “Don’t be evil” and noble commitment to change the world for the better, only to find their pre-eminence has made them vulnerable in a world of realpolitik. And depending on your perspective, Amazon might appear to be the Lannisters, ruthlessly accruing power and influence across multiple different battlefields and somehow managing to avoid serious antitrust consequences despite the extent of their dominance.

It is certainly noteworthy that while Amazon is shrewdly achieving market dominance in so many fields – including 43 per cent of all online retail sales in the US last year, 38 per cent of printed books, 75 per cent of ebooks, 95 per cent of audiobooks and 45 per cent of the cloud computing market – it has avoided significant antitrust scrutiny due to a fierce determination to drive down costs.

Indeed, it was Apple that was slapped with a significant fine by US regulators for price-fixing with book publishers in an attempt to challenge Amazon’s ebook monopoly – textbook cartel behaviour, never mind that Apple’s iBooks store had negligible market share compared to Amazon.

In the US, antitrust law is fixated on prices, predicated on the belief that high prices are the only way consumers can be harmed. The EU, on the other hand, sees unfair restriction of competition as harmful to consumers in its own right, and is increasingly seeking to intervene to ensure more competition is possible.

Similar to the feudal society of Game of Thrones, the new digital economy has a winner-takes-all dynamic, with all power and wealth accumulating to a handful of significant companies. In industry after industry, the company that offers the best experience at the right time comes to dominate and, as the European Commission pointed out in its decision against Google, “There are also high barriers to entry in these markets, in part because of network effects: the more consumers use a search engine, the more attractive it becomes to advertisers.”

That applies just as much to the likes of Facebook or even AirBnB as it does to Google, though it is important to note that Apple is somewhat of an exception here, in that its huge profits come from selling high-margin hardware to a minority of customers, rather than selling low-margin products to big numbers, or selling ads against free software.

Vestager was clear that this decision is about ensuring future innovation. “What Google has done is illegal under EU antitrust rules. It denied other companies the chance to compete on their merits and to innovate. And most importantly, it denied European consumers a genuine choice of services and the full benefits of innovation.”

But for all the power of competition authorities to police these companies and determine the ground rules of these industries, it is often completely different events that end up reshaping the innovation landscape and realigning the power dynamics.

Consider the case of Microsoft – which perhaps has a touch of the Targaryen dynasty about it. Recall that the protracted browser wars of the 1990s and the antitrust battles of the time left the Redmond giant drained of energy and focus, but still the undeniable chief of the technology world.

For Bill Gates, the transition to mobile was the equivalent of the Westerosi winter, always coming soon, and for years he persisted in unveiling his tablets and smartphones, proof of his preparedness. And then Microsoft’s winter came, in the form of mobile, and all those years of preparation were for naught, as they were preparing for the wrong sort of battle. By the time they realised, it was too late, and they had lost relevance.

The battle between the technology giants may not be as bloody as Game of Thrones, but for all of us, the stakes are high.