Baldness trumps malaria? Funding shows something out of kilter 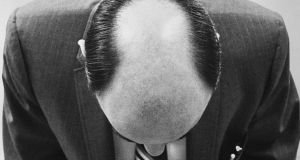 “If you are the guy watching your hair thin and gradually disappear you are not going to be happy about it and will be cheering on the scientists.”

The World Health Organisation estimates that about $1 billion is spent each year in the search for a cure for Aids, and $547 million is invested a year in trying to beat malaria. These are major killers and not just in the developing world; about half the world’s population live in places where malaria is a constant threat.

We are told, however, that much more is spent on trying to halt or reverse male-pattern balding in the developed world. An estimated $2 billion is spent worldwide on surgical procedures in an effort to prevent baldness, according to the International Society of Hair Restoration Surgery. There is no doubt which of these conditions deserves to be supported with a steady stream of research funding but that is not the way things cut in the world today.

Male baldness affects hundreds of thousands of men in Ireland, about 6.5 million in Britain and perhaps 35 million in the US. Compare this to the 219 million affected by malaria and the 660,000 resultant deaths across the world and things seem wildly out of balance. First-world problems.

Discussing such issues can sound totally preachy and self righteous and if you are the guy watching your hair thin and gradually disappear you are not going to be happy about it and will be cheering on the scientists searching for an answer. But it is important that people recognise there is something out of kilter and our shared global responsibilities to one another don’t seem to be reflected in the numbers.

In developed countries paediatric diarrhoea is a short-term inconvenience in most cases but in places like sub-Saharan Africa it is a killer. TB and respiratory diseases wipe out millions of children around the world each year the WHO says.

An estimated 10 million children under five die annually from infectious diseases because they have no access to treatments that are readily available in the developed world. Another three million die from diseases that have been eliminated in richer countries through vaccination.

It is not as though the appliance of science when employed against apparently intractable diseases cannot make an impact. Polio has been wiped out as a result of international vaccination programmes and smallpox has also been eliminated, with one of the last recorded cases seen in 1977. Medical research helped eliminate these conditions when backed up by an international effort to help poorer countries to access and pay for the vaccines. One can only assume that if similar research expertise was applied with equal vigour then other serious health threats might also become a thing of the past.

However, the challenge is, as ever, to find the will and the money to make things happen. The odds are stacked against achieving victories such as that against polio or smallpox. The Global Forum for Health Research describes it as the 10/90 gap: the fact that only 10 per cent of worldwide expenditure on health research is devoted to the problems that afflict 90 per cent of the world’s population.

It is also disappointing that we don’t even have to wait for the scientists and medics to discover an outright cure for conditions such as malaria. Cheap and effective ways to reduce the case load of this condition already exist. One involves installing mosquito nets to which an insecticide has been applied and there are others being pursued by the WHO’s Roll Back Malaria Partnership.

The partnership formed in 1998 and brings together international partners in an effort to reduce the disease burden and avoid duplication of effort. It faces a funding gap of $5 billion, however, which stops it from making these low cost interventions fully available in the countries that need them.

Meanwhile the world spent an estimated $460 billion in 2014 on cosmetic products, with the market expected to grow steadily to $675 billion by 2020 according one analyst. The single greatest spend by consumers was on products used to treat conditions such as dry skin.

People have a right to buy these products and this is not at all a guilt trip laid at the feet of those who make use of them. Who isn’t a consumer of these products, even if only for purchases of soap and shampoo.

It is, however, a plea for more research investment that supports for example the development of “orphan drugs”, pharmaceuticals that could have an impact but which are not being developed and tested because there is no one to pay the bill. In some cases the orphans cater for too small a group of patients and so won’t make money for the drug companies if they decide to bring the drug to market. And for others there may be doubts about the ability of a country to pay if drugs are shipped. For these reasons, and others, it becomes uneconomic to support research into orphan drugs, and so potentially useful treatments are not pursued.

This also expresses the hope that research funding continues to flow into tackling malaria and AIDS and also into efforts to help introduce low cost interventions for the treatment of children who are under threat of death due to lack of vaccines and simple treatments.