Solving the Enigma: A machine that finds drugs faster 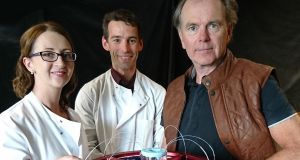 The Enigma machine cracked enemy codes during the war. Now a new machine with the same name is set to break the mould in drug development.

University of Limerick spinout Hooke Bio has its sights set on disrupting the process of drug discovery. In a nutshell, Hooke has developed a platform that runs screening tests 20 times faster and at a quarter of the cost of current commercial systems. This will be music to the ears of drug companies that run millions of tests a year to explore and test the feasibility of potential new drug combinations.

“Screening for new drugs is a costly and laborious process and the pharma industry has essentially replaced human scientists with robotic arms. However, these arms are slow and expensive to run, so this is not the optimum solution either. We knew there had to be a better way and set out to find it,” says Hooke Bio’s chief operating officer, Finola Cliffe.

“We have now developed the Enigma platform, which integrates dispensing, incubation and measurement on one platform without the need for robotics. In addition to being faster and cheaper, it can also undertake 3D cell culture. This means pharma companies can test new drugs against more physiologically relevant cell disease models. Our patent-protected Enigma platform also allows unlimited drug screening at the early crucial drug discovery phases.”

Hooke Bio started life in 2014. Its founder, Prof Mark Davies, is no stranger to the start-up world. He was a cofounder of Stokes Bio, which was sold to American company Life Technologies for $44 million in 2010. Hooke has three full-time employees along with four full-time PhD students and it plans to hire an extra 12 people over next two to three years.

About €900,000 has been spent developing the product over the past three years with two-thirds of this coming from Enterprise Ireland’s commercialisation fund and the rest from private investment. The company is now looking for an investment of €500,000 to close out its current financial needs. The pharmaceutical industry accounts for 48 per cent of the global high-throughput screening market, and Hooke is looking for a piece of the action in a sector estimated to be worth $12 billion by 2019.

“With Enigma, rather than physically replacing the scientist doing the testing, we have devised an entirely new way of screening,” says Cliff. “We use micro-fluidic engineering technologies to screen in tiny droplets (mini bioreactors) that flow in tubes. We can test unlimited numbers of drug candidates in this manner and nobody else is offering this type of technology to the pharma industry. Existing systems use conventional fluidics and are focused on 2D cell culture. We can undertake 3D cell culture, which allows biomimicry of normal physiological processes. Enigma rapidly analyses pharmacological compounds, including their correlation to known disease profiles.”

Search for a partner

The next step for Hooke is to find a suitable industrial partner to establish proof of concept in a real-word setting. “We are planning to engage in a co-development project to demonstrate the market readiness of our system and to prove it can perform the assays that the different drug companies require,” Cliff says.

Enigma has a lot of built-in capability and companies will ultimately be able to buy both the hardware itself and exclusive licenses for certain capabilities. Once Enigma is proven, the company will apply for CE marking and find a distributor to sell the device and provide the necessary maintenance and system upgrades. Asked how much the machine will cost Cliffe says “a lot less than its equivalent robotic arm which typically costs somewhere between €750,000 and €1 million. A ballpark figure for Enigma at this stage is around €500,000.” The product is due to go on sale within the next three years.