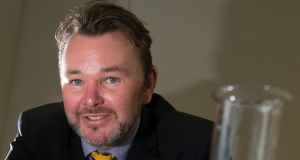 Irish firm Kastus is to “significantly increase” its workforce next year after striking a deal to supply its product to the largest manufacturer of ceramic and glass tiles in the UK.

Kastus, which currently employs 15 people, has developed a pioneering antimicrobial coating called Log4+ which kills 99.99 per cent of harmful bacteria and superbugs such as E.Coli and MRSA.

The product has potential applications in areas such as consumer electronics (touch screens, keyboards and smartphones), the food industry, the healthcare sector and the automotive, air and marine industries.

Following the deal with British Ceramic Tile (BCT), superbug-resistant floor and wall tiles will be on the market in the UK early next year. BCT has the capacity of producing 30,000 sq m of tiles per day.

The product is a permanent and patented indoor light-activated coating solution that is factory applied to ceramic or glass and effectively kills superbugs or inhibits their growth, using no toxic additives or bi-products.

BCT chief executive Tony Taylor said he was “delighted” to be working with Kastus.

Kastus is in collaborative trials with a number of global companies in the ceramics, glass, medical devices, consumer electronics and architectural hardware sectors, and is in talks with some of the world’s largest phone makers in Silicon Valley.

The company has already been granted US and UK patents with global patents pending.