A lot riding on Brexit endgame for Irish scientific endeavour

Dick Ahlstrom: Let there be no repeat of the recent unedifying political point-scoring 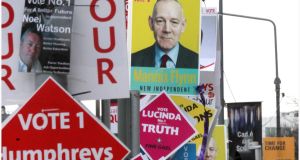 The Irish love a good political row, and better still a general election. And the machinery and personnel needed to launch the parties into a political battle always seem to be there, ready to go at the slightest hint that a confidence-and-supply agreement, or a shaky coalition or internal party plotting over leadership looks set to trigger a campaign.

Generally the public goes with the flow once an election is mooted, but last week’s near-miss on a pre-Christmas general election was a little different. While there were plenty of politicians suggesting “Them’s fightin’ words” and demanding resignations, the electorate was in no mood for a campaign.

No one wanted to see mug shots of the political hopefuls competing for space on the street lights and telephone poles with the Christmas decorations in our cities, towns and villages. It was the wrong time to start throwing shapes about an election. We would have had the poll on or about December 19th and then would have had the unedifying spectacle of watching constituency recounts on television through the days of Christmas instead of The Sound of Music or The Wizard of Oz.

Happily our political masters came to their senses, although we were subjected to about 10 days of point-scoring and insult-trading that got very close to boiling over into a national poll. Those 10 days did, however, drop us into a period of political drift at one of the worst times possible, just before the final major negotiating session on the road to Brexit.

There could not have been a worse time for the Government to get bogged down in a local – if very important – political row given the high-roller stakes at every turn in the Brexit discussions.

The Government will argue its collective eye remained on the ball, but all the key players, including politicians and top civil servants, would have experienced some level of distraction. And it was obviously not possible for Cabinet members to ignore the firestorm triggered by the Sgt Maurice McCabe emails. We didn’t need this highly politicised row just as the negotiations were coming down to the wire for things such as a hard border and residency rights.

Questions were raised about who was calling the shots in the Department of Justice, but other departments were also affected by the political drift. What, for example, has been decided about the rights of academic and private sector researchers from the EU – including Ireland – being able to continue working and living in the UK? And what will happen to their British counterparts working in the EU 27, many of whom are embedded in labs and research centres here?

The UK absorbs more than half of the Irish scientists who decide to go abroad for a time to advance their careers, and UK and Irish scientists are often found as partners in EU-funded research projects.

Establishing residency rights for these researchers is important for lots of reasons, and is a factor when seeking to attract more foreign direct investment. Our international mix of researchers – including those from the UK – speaks of our competency in research and suggests that if the science is good enough to attract them, then multinationals will be more confident of finding the staff they need for their operations. And successful interaction between research academics of all nationalities and our indigenous science-based companies is also an inducement for them to invest more in research.

Government agencies, including the Irish Research Council and Science Foundation Ireland, have put together clever programmes in an attempt to attract UK scientists to Ireland, allowing them to pursue EU-funded research while working either here or at their UK bases. The final details of December’s Brexit negotiations were meant to clarify how this would all play, but have yet to be confirmed.

The quality of Ireland’s research output and finance for research has reached a level where top international scientists are choosing Ireland over other countries as a place to set up research groups. We are particularly attractive to UK scientists given our shared language and cultural similarities as well as easy access between the two countries. What we didn’t need at this time was political point-scoring, even though the issues involved relating to Maurice McCabe were of genuine national importance.

We won’t want a repeat of this kind of politicking if there is a risk we might drop the ball during the Brexit endgame. And we don’t want our local and imported scientists to have to keep worrying about residency status and Border controls – we want them to pursue their ambitions in a science-friendly environment without fear of deportation.