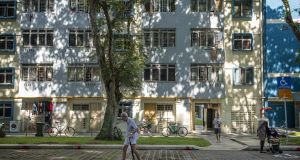 A public housing estate in the Toa Payoh district of Singapore. The government has announced new rules for those willing to buy older properties. Photographer: Bryan van der Beek/Bloomberg

Singapore’s aging public housing has been a source of anxiety, for home owners and the government alike. It’s become particularly acute in the lead up to national elections considering more than 40 per cent of the population’s wealth is tied up in real estate.

There may be some relief, however, with the government announcing new rules for those willing to buy older properties. According to analysts, the changes should halt falling resale values and support dwindling buyer demand.

From last week, would-be home buyers can unlock more of their retirement savings to pay for a property, so long as the remaining lease of that property is at least 20 years and covers the youngest buyer until they’re 95 years old.

Under previous rules, pension fund usage restrictions were linked to the amount of time left on the lease rather than a buyer’s age. (In Singapore, around 80 per cent of people live in Housing Development Board flats, which all come with a 99-year lease.)

With many leases approaching the 40-year mark, the resale value of apartments has been dropping because there isn’t clarity over what will happen at the end of the term.

HDB unit resale prices fell 0.3 per cent in the three months ended March, their third straight quarterly decline. HDB apartments with less than 60 years of residual lease made up 14 per cent of resale transactions in the first quarter -- the highest percentage of older flats sold on record.

“By raising the age to 95, the pool of buyers who can utilise pension funds to buy older flats will increase,” said Christine Sun, the head of research at OrangeTee and Tie Pte. “The increased demand may stabilise the price gap between older and newer flats.”

The move is also politically prudent at a time when the ruling People’s Action Party party led by prime minister Lee Hsien Loong is headed for elections. Central Provident Fund monies are an important source of real estate funding: On average, more than S$10 billion ($7.3 billion) has been withdrawn each year for the past five years for property purchases.

Supporting the value of older homes may boost demand for private homes – which in Singapore are typically condominiums complete with pool, gym and other facilities – as well. That’s because owners of older apartments may be able to sell them faster and then upgrade.

“The amended rules could potentially increase the pool of buyers and inject more liquidity into the resale market for older flats and private leasehold homes,” said Nicholas Mak, an executive director at ZACD Group Ltd.

“This could help owners of older flats who previously found it challenging to sell.” - Bloomberg