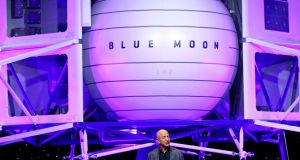 Amazon founder Jeff Bezos has unveiled a plan for a vehicle designed to land on the moon, in what he said was the first step to build colonies for humans in space

Amazon founder Jeff Bezos has unveiled a plan for a vehicle designed to land on the moon, in what he said was the first step to build colonies for humans in space.

Mr Bezos revealed his ambitious plan in Washington on Thursday during a slick hour-long presentation, more akin to an Apple product launch than an announcement by his e-commerce company, Amazon.

“It’s time to go back to the moon - this time to stay,” Mr Bezos said with a flourish, as a black curtain dropped behind him to reveal his lunar lander.

Mr Bezos, the world’s richest man, has been working quietly on his space plans since founding Blue Origin, his rocket company, in 2000 - two years earlier than fellow billionaire space enthusiast Elon Musk founded SpaceX. Two years ago, Mr Bezos announced he would sell $1 billion (€890 million) of his stock in Amazon every year to help fund the company.

Since then, Blue Origin has built New Shepard, a reusable rocket which it is developing to take tourists to the edge of space. The company says it is planning to stage its first manned flight in New Shepard towards the end of this year, but is not yet selling tickets for tourists to travel on it.

Mr Bezos on Thursday said he has a much grander vision for the future of his company, of space travel, and of humanity as a whole.

The Amazon boss wants to land on the moon as the first step towards establishing purpose-built colonies in which humans could live. He said this would be a way to solve the problem of the Earth’s declining resources, which he said would otherwise lead to rationing.

“If we move out into the solar system, for all practical purposes, we will have unlimited resources,” he said.

“O’Neill colonies” were first envisioned by the Princeton scientist Gerard O’Neill, who suggested in the 1970s that the surface of a planet might not be the best way for humans to live away from the Earth. He proposed building spinning cylinders which would replicate gravity and orbit the Earth, inside which humans could live.

Mr Bezos expanded on that idea on Thursday, saying a series of O’Neill colonies could be used for industry, work and recreation.

“Imagine Maui, on its best day, every day,” he said, describing the climatic conditions he expected humans to create in the colonies. “Imagine what architecture would be like if it did not have to fulfil its primary purpose of shelter.”

For his plan to work, he said, humans would need to gather material from the moon, as lifting it off the Earth is far more expensive due to its higher gravity. Landing his Blue Moon spacecraft on the moon would be the first part of such an undertaking, he said.

“We are going to build a road to space, and then amazing things will happen,” he said.

And while Mr Bezos has publicly clashed with Donald Trump, the US president, he made an apparent pitch to the White House to help him in his latest endeavour.

Referring to a challenge laid down by Mike Pence, the vice-president, for Nasa to take Americans back to the moon by 2024, Mr Bezos said: “We can help meet that timeline - because we started three years ago.” – Copyright The Financial Times Limited 2019