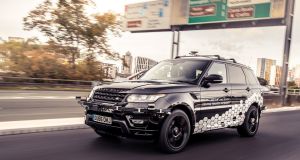 ‘It’s easy to do autonomous cars in California or Arizona, where the roads are big, the lane markings are clear, and you have great weather,’ says Cormican

Jaguar Land Rover (JLR) and Valeo, the French vehicle technology supplier, are building up a major hub in the west of Ireland for autonomous vehicle research and development. CAV Ireland (Connected and Autonomous Vehicles) is backed by the IDA and Enterprise Ireland, as well as Science Foundation Ireland, the Department of Transport, and the Lero research institute. There are plans to build up an interlinked group of companies and research centres, around Valeo’s existing operations in Tuam, Co Galway, and JLR’s new autonomous vehicle development centre at Shannon.

I would challenge any car maker to come down here, to Co Kerry, and take a vehicle from Killarney, around the Ring of Kerry

There are even proposals to build a major test track and proving ground facility, directly adjacent to Shannon Airport, which would allow car makers to test and develop their robotic cars before unleashing them on the roads. JLR has even earmarked a circuit of roads in Co Clare (running from Kinvarra down to Kilrush and back around).

Such development could mean a boost to employment in the area. Speaking to The Irish Times at the Electronomous car technology conference in Killarney, JLR’s John Cormican said: “We started with 12 people, we’re now up to 250. And we intend to keep expanding into the future. It’s been a great journey so far.”

Meanwhile, Valeo, the giant French vehicle technology and components supplier, confirmed at Electronomous that it intends “double-digit” hiring of artificial intelligence engineers and developers for its site in Tuam.

Why is the west of Ireland suddenly such a hive of autonomous vehicle technology development? “We’re close to Limerick, Cork, and Galway where we’re based, and in those three cities you have three world-class universities, and three world-class technical colleges, so we have a great pipeline of talent for engineering and software. For the past 30-40 years, we’ve been exporting that talent all over the world which in some ways is great, it’s part of our DNA as a nation. But now hopefully a lot of folks will be staying home and working on tech like this here,” said Cormican. “The amount of tech companies in this country already is mind-boggling. The Dublin tech scene is pretty well known, but out west it’s really growing now. You have ourselves, General Motors, Valeo, Analogue Devices, Cisco, Ericsson, Johnson Controls and more.”

Beyond the steady supply of talented workers, though, there are other aspects to Ireland which make it a tempting location for those developing new automotive technology.

“We’re at this interesting point between level two and level three autonomy, and there are some big statements being made about getting to level four and level five, which is fully ‘brain off’ robotic driving. Well, I would challenge any car maker to come down here, to Co Kerry, and take a vehicle from Killarney, around the Ring of Kerry, then head down to Dingle over the Conor Pass, at night, in winter. These are very, very tough conditions and use cases. It’s easy to do autonomous cars in California or Arizona, where the roads are big, the lane markings are clear, and you have great weather. It’s not completely simple, but it’s being done right now, in many ways it’s been cracked,” said Cormican. “So how do you take that to the next level? How do you cater for a car driving itself in every use case, with all of those challenges? And we cannot compromise on safety. Tens of thousands of people are killed every year in road collisions, but we have come to accept that as a society. We have the technology to eliminate that, but if that software makes a mistake and kills one person, that’s unacceptable to us too? I’m not saying one or the other is right, but we do know we can save lives. We should be able to do this as a technology industry.”

“For a car to sense its environment, to plan its journeys, through traffic, city, urban areas, then for a car to act upon that, when it detects pedestrians, or maybe even a duck on the road, that’s a huge, huge challenge,” said Cormican. “To manage all this in real-time. We need software, we need algorithms, we need pack skills, we need data scientists, data centres, we need cyber security, functional safety, and that’s what we have in this country. That’s why we wanted to create a cluster around autonomous and connected vehicles in this country and work with Silicon Valley, with Detroit, with China, with all the other countries around the world.”

It’s two years since JLR announced its plans to set up a development centre in Shannon, and Cormican originally started with a team of just 12; mostly (like himself) formerly of Intel.

“As people said at the time ‘who’d have thought that you’d invest in Ireland when it comes to autonomous driving?’ It was a team of ex-Intel guys, myself included, and about 12 of us took that jump and convinced JLR to invest in Ireland. We’re literally airside, right beside the airport. We were a bunch of engineers; cyber safety experts, functional safety experts, virtualisation engineers, embedded software engineers. A good mix of people.”

A good mix that hit the headlines last week, when some of the first fruits of their labours was announced: a virtual wallet, embedded in the vehicle’s software, and the idea being that as you’re driving around, you’re automatically collecting data on weather, traffic, on potholes maybe. You can send that data to the cloud, through the car’s connection, and then other users can make use of that data, can monetise it, and then can reward you for collecting it with free parking, or toll payments, or free coffee. And you’ve done nothing, you’ve just driven around and been rewarded for it.

“Again it’s a mind-set change that we haven’t thought about before, but it’s the future,” says Cormican.

The worry though must surely be that in that future, Jaguar Land Rover’s place in this new automotive firmament may be threatened. The company has been financially ravaged in the past 12 months, by a mixture of plummeting sales in China and concerns over how it will deal with Brexit. On top of that, it’s now plunging into an arena that’s changing with staggering rapidity and in which there are no clear or obvious winners.

Jaguar beat its major German competitors to the market with a sleek, sexy, all-electric SUV (the I-Pace, good enough that we named it our Irish Times number one car for 2019, and it picked up the European Car Of The Year award too) but those competitors are catching up fast. How can a relatively small car maker such as JLR keep pace with the financial might of BMW or Mercedes? Cormican is certain that the answer lies in collaboration: “I drove down here from Shannon in our Level 4 Discovery. It has multiple LIDAR, multiple radar, multiple camera. It’s quite a beast, worth several hundred thousand dollars. To get that thing to drive itself on a test track or a proving ground, or a public road, is very, very complex. And we in the automotive industry are in the centre of that world, but we need technology partners to make that happen, we can’t do it by ourselves.”

The technology that Jaguar Land Rover is developing in Shannon is astonishing, beyond where most of us consider the cutting edge as lying. From a parochial perspective, too, it’s great that there is so much Irish involvement in a global industry that’s reckoned will be worth (depending on whose figures you rely upon) €5.3 trillion in a decade’s time. For Jaguar Land Rover to secure a piece of that pie, though, it’s going to have to focus on selling a lot of cars in the meantime, to stay afloat long enough to benefit from the bright minds of Ireland’s new autonomous vehicle hub.