Floating the idea of putting solar panels in the water 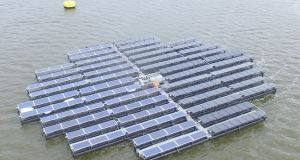 Mass protests in London have underlined the degree to which governments struggle to achieve coherent renewable energy strategies. Solar power, it is hoped, could be the world’s largest source of electricity by 2050. The problem, though, is not finding the sun – but the space.

The inescapable fact is that solar companies are competing for land with industry, agriculture and, in many countries, the housing that comes with an expanding population. Even roof space is at a premium. And that’s almost as true in the Netherlands as it is in Southeast Asia.

The innovative answer is to place the photovoltaic systems on water, though even that is not as clear-cut a solution as it at first appears. Floating panels are more expensive to install, the open sea is a rough environment which increases the cost of wear and tear, and shipping is a constant hazard.

There are pluses too, however. More expensive, yes, but floating panels are also up to 16 per cent more efficient because the cooling effect of the water helps to extend their life.

“That added efficiency helps to offset the higher cost of installation,” says Céline Paton of the Solar Energy Research Institute of Singapore.

All of which adds up to the importance of choosing the right geographical location for a floating solar “island” of interconnected panels. It is, perhaps the single most important technical decision, certainly at the design stage.

That’s why Dutch water utility PWN and solar power experts Floating Solar have chosen the Andijk reservoir in the north of the country for not just one but an extraordinary 15 solar “islands” comprising a total of 73,500 panels – making it the world’s largest sun-tracking solar archipelago.

“At this stage in such a cutting-edge project, financial information is commercially sensitive given the level of competition in the international market.”

The broad timeline for the archipelago is already decided, however, planned – believe it or not – around the migratory season for birds that nest and breed in the vicinity of Andijk, and whose wellbeing is carefully monitored by environmental groups.

“The birds’ welfare means we have just three months of the year when we can actually work on the water: September, October and November,” Van Druten tells The Irish Times.

“That means that everything has to be planned in minute detail to make the maximum use of those 12 weeks. In fact, everything we do is designed to have the least impact possible on the water, the wildlife and the eco-system.”

Taking the nesting period into consideration, the first three of the 15 islands – 140 metres each in diameter – should be in place by the end of November. Beyond that, barring surprises or complaints from the birds, the entire Andijk project aims to be up and running sometime in 2021.

What’s unique about this solar archipelago is that it will constantly re-orientate itself to make sure its panels are facing into the sun – not unlike the natural ingenuity of a sunflower.

This is done using Optimal Solar Tracking (OST), a system designed and patented by Floating Solar, whose integrated floating, turning and tilting technology guarantees to increase the yield of the solar panels by up to 30 per cent, a very significant cost-saving.

“The sun-tracking system involves three buoys which are used for anchoring the island, combined with a system of cabling which keeps it together and at the same time turns it around,” explains Van Druten.

“It sounds simple but the highly sensitive interaction of the buoys, the cables, the winches and the dynamics of the water means making it work seamlessly is a real challenge.

“In technical terms, the tracking can be done in either of two ways: the system can be made to track automatically towards the light, or, because the trajectory of the sun is pretty predictable, we can programme a specific algorithm to drive the tracking.”

Another unique aspect of the archipelago is that it will use weather risk management (WRM), technology that ensures that if the island is hit by severe storms, it moves automatically into a position where the wind and waves can move through it more easily. In effect, it curls up and protects itself.

However, the system has already been stress-tested in severe weather conditions with wind speeds of around 60mph, and was robust, even without using WRM.

Given the need for scale in power generation, the Andijk archipelago is not the only project under way between Floating Solar and PWN. They’re also working on a second development at Hoofddorp, near Amsterdam. The difference is that in Hoofddorp the solar panels are static.

“Between Andijk and Hoofddorp we’d aim to help PWN to generate power equivalent to the needs of around 10,000 households,” says Van Druten.

There’s no doubt that solar is the renewable energy of the future and floating solar is fast becoming the more practical option.

In February, the World Economic Forum (WEF) in co-operation with the Thomson Reuters Foundation, issued an information paper entitled “Why floating solar panels are on the rise”, aimed at encouraging greater investment.

More broadly, the International Energy Agency (IEA) projected in 2014 that by 2050, concentrated solar power and solar photovoltaics would generate 11 per cent and 16 per cent respectively of worldwide electricity consumption – and that solar would be the world’s largest source of electricity.

Most solar installations would be in China and India, forecasts the IEA, and certainly China – as on so many other technological and economic fronts – is leading the way.

The largest photovoltaic power station in the world is the 850MW Longyangxia Dam Solar Park in Qingai, on the fringe of the Tibetan Plateau in the west of the country. And already China accounts for more than 1.1GW of floating solar capacity already installed, according to the World Bank.

In India, the first floating solar power plant of 10KW was installed in a lake near Kolkata in 2014, and the government more recently announced plans to develop floating capacity using reservoirs and dams across Kerala, Assam, West Bengal and Odisha.

Southeast Asian countries where there’s a high dependence on hydropower are also enthusiastic adopters. The Electricity Generating Authority of Thailand says it plans a 45MW floating solar plant at Sirindhorn Dam in the north-east of the country, and ultimately 16 similar projects at nine other hydroelectric dams.

The cost of solar power in general is falling, and the cost of floating panels is falling too

Singapore is already developing one of the world’s largest offshore floating solar systems, in the Strait of Johor, to the north of the island.

However, there’s still quite a way to go. The technology’s potential is about 400GW, says the WEF, or about as much generating capacity as all the photovoltaic panels installed around the world up to 2017.

“Technological advances should soon see floating systems on a par with ground systems in terms of cost,” says Céline Paton.

“On the other hand, there’s one important thing to remember here: this is not a contest between ground systems and floating systems. More than anything else, it’s all about suitability for the environment. It’s about context.”