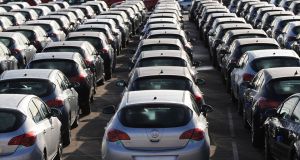 European car sales in March rose to their highest level for the month as Fiat Chrysler and Renault took advantage of a solid economy to lure more buyers. (Photograph: Paul Ellis/AFP/Getty Images)

European car sales in March rose to their highest level for the month as Fiat Chrysler and Renault took advantage of a solid economy to lure more buyers.

Benefiting from the shift in Easter to April, industrywide registrations climbed 11 per cent to 1.94 million vehicles last month, the Brussels-based European Automobile Manufacturers’ Association, or ACEA, said on Wednesday. Fiat and Renault gained market share at the expense of regional leader Volkswagen and No. 2 PSA Group.

Irish car sales, however, were less buoyant. There were 19,915 new passenger car registrations in March, that represented a drop of 7.49 per cent compared to the same month last year, according to the Society of the Irish Motor Industry.

Falling unemployment and 15 consecutive quarters of euro-area economic growth helped buoy consumer confidence in Europe, underpinning auto demand. Even the UK, Europe’s biggest auto market after Germany, has resisted a Brexit-induced slowdown, with sales in the country up 8.4 per cent last month. The region’s resilient car market is a contrast to the US, where vehicle sales unexpectedly declined in March.

“The latest car market result supports the positive news that we have seen from the wider economy” in Europe, Jonathon Poskitt, an analyst with LMC Automotive in Oxford, England, said in a report, adding that the seasonally adjusted annual sales rate in western Europe is currently at the highest level since early 2008.

Still, sales growth will likely slow as a recovery from a two-decade low in 2013 loses steam. Annual deliveries in the coming years are expected to fall short of the 2007 peak as more consumers opt for car-sharing and other alternatives to owning their own vehicles. LMC forecasts that western European sales will rise 2.7 per cent in 2017, compared with the 7.4 per cent gain through the first three months of the year.

Germany, Europe’s biggest market, posted an 11 per cent gain in March. Registrations in France, in the midst of a hotly contested election, climbed 7 per cent. In Italy, car deliveries surged 18 per cent. The ACEA compiles numbers from the European Union’s 28 member countries, excluding Malta, plus Switzerland, Norway and Iceland.

Volkswagen’s European sales failed to keep pace with the overall market, rising 6.2 per cent in March. That caused its market share to drop to 21.4 per cent from 22.4 per cent a year earlier. The manufacturer’s diesel-related troubles have persisted more than a year into the emissions-cheating scandal.

Paris-based PSA, which agreed in March to purchase General Motors European division, saw its market share, including the US company’s Opel unit, narrow to 16.1 per cent from 16.9 per cent, underscoring the competitive pressure in the region.

Fiat Chrysler, whose Jeep Renegade and Fiat 500X have been winning over customers in Europe’s growing sport utility vehicle segment, boosted its market share to 6.8 per cent from 6.3 per cent. Renault’s Captur SUV and Scenic minivan helped it woo 9.5 per cent of the region’s car buyers in March, up from 9.2 per cent a year earlier.