Strong dollar is hurting purchases in almost all regions 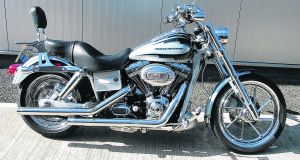 Harley-Davidson reported slowing motorcycle sales in almost every region, underscoring the company’s demand challenges against a strong US dollar.

Motorcycle revenue fell 16 per cent to $1.33 billion in the first quarter, shy of the $1.35 billion average estimated by analysts. Bike sales fell both in the US and overseas with the exception of Latin America, the company’s smallest market.

The iconic American brand seeking to build its international sales is riding into significant currency headwinds. A strong dollar effectively lowers the price of competitors’ foreign-made motorcycles sold in the US and reduces the profits Harley earns on bikes shipped overseas.

President Donald Trump said last week the dollar had gotten too strong, which he attributed to confidence in his policies. ChieffFinancial officer John Olin said on Tuesday the dollar could reduce Harley’s profits by as much as $10 million this year.

Harley-Davidson shares fell 4.5 per cent to $56.73 in New York morning trading. The shares had gained 28 per cent over the past year up to Monday’s close.

First-quarter profit per share fell to $1.05, beating analysts’ average estimate for $1.02, and the company reiterated its full-year forecasts for operating and gross margins to be in line with last year’s results. Financial-services profit fell 6.6 percent to $52.6 million. Full-year motorcycle shipments will be flat to down modestly, the company said.

Harley’s projected deliveries of 80,000 to 85,000 motorcycles in the second quarter imply that second-half sales will need to increase by 20 per cent for full-year sales to be flat, Joseph Spak, an analyst with RBC Capital Markets, said in an email to clients.

“We believe the market will doubt that level of shipments is the correct strategy amid still soft retail,” he said.