Ecocem appeal over €45m California mill to be heard next month 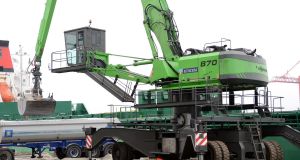 Ecocem’s US arm and Vallejo Marine Terminal, whose application for permission to build a deepwater berth to service the mill was also refused, are challenging the commission’s ruling. Photograph: Eric Luke

The appeal by Irish cement manufacturer Ecocem against a US authority’s decision to refuse it planning permission for a €45 million mill could be heard at the end of next month.

The planning commission in Vallejo, California, recently refused Ecocem’s US subsidiary, Orcem Americas, permission to build the grinding mill on the city’s waterfront on environmental grounds.

Orcem subsequently appealed the ruling with Vallejo city council. This is likely to be heard between May 30th and June 1st next.

Both Ecocem’s US arm and Vallejo Marine Terminal, whose application for permission to build a deepwater berth to service the mill was also refused, are challenging the commission’s ruling.

Orcem argues that the commission relied on “subjective and arbitrary judgments” in reaching its conclusion. “Those judgments were made as a result of unfair hearing process orchestrated by a biased staff,” its appeal states.

Shortly before the decision, Vallejo city hall officials recommended that the planning commission refuse permission on a series of grounds, including increased traffic and pollution.

Orcem also wants the council to correct errors in a final environmental impact report on the project and to overturn a decision designating six buildings on the waterfront site as historic.

Meanwhile, students of the California State University Maritime Academy have voiced their opposition to the project. They say it threatens the quality of the surrounding environment, which includes the third-level institution’s campus.

Orcem wants to build the factory on the site of an old flour mill on Vallejo’s waterfront. It will grind furnace slag from iron smelting, which can then be used as a component in cement.

It intends importing the slag from the far east, hence the need for the deepwater berth. Orcem applied originally in 2015 but met opposition from local groups whose members feared its impact on the environment.

Ecocem and its subsidiary have always maintained that they adhered to and exceeded environmental law requirements.

1 Who are Ireland’s 17 billionaires?
2 My father in a nursing home wants to gift me his house
3 Nama lends Cosgraves €15m to fund huge apartment development
4 Health insurance: Switch often for your financial wellbeing
5 Are there annual limits on inheritances or gifts to a child?
6 Builders completed 21,500 homes in State during 2019
7 Property firm sues engineering company over waterproofing of basement
8 Pretax profits decline sharply at Tuam-based car tech firm
9 Irish whiskey sales slow in US but distillery visitors top 1m locally
10 Cubic Telecom raises more than €11 million in funding
Real news has value SUBSCRIBE